Different Ways to Sell Comic Books & Collectibles Pt 3: Mid-Range Auction...
Hottest Comics: Cable’s First Appearance Edges Out Hulk #181 and FF #48
Weekly Silver, Copper, & Bronze Age Spec: Ghost Rider
Skybound is Opening Up For Investors – Would You Invest With Them?
The Comics That Every ’80s Kid Had to Have
Action Comics #1 “Rocket Copy” Sells for Record $3.5 million
Oddball of the Week: Lady Deadpool
Has Uncanny X-Men #120 Overcorrected?
The Sports Cards That Every 80’s Kid Had to Have
Heritage’s Tuesday Mini-Boss Video Game Finds for January 24
Comics 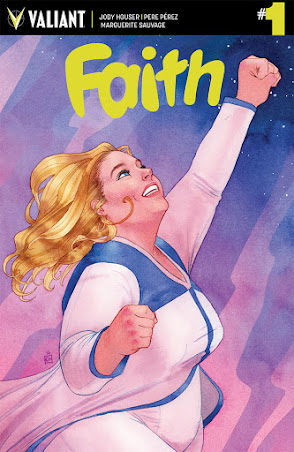 Media Release — As revealed by the New York Times, Valiant is proud to announce that Faith is stepping out of the pages of her five-time sold-out limited series debut and into the pages of her first-ever monthly title this July for FAITH #1 – the FIRST ISSUE of an ALL-NEW ONGOING SERIES from rising star Jody Houser (Orphan Black), Harvey Award-nominated sensation Pere Perez (ARCHER & ARMSTRONG), and acclaimed artist Marguerite Sauvage (DC Comics Bombshells)!

“Since Faith’s solo debut hit stands, no matter where we’ve turned – from conventions to comic shops to social media – fans all over the globe have called on Valiant to further Faith’s adventures beyond four issues alone,” said Valiant Editor-in-Chief Warren Simons. “Now that day has come, and we’re proud to say that Faith’s journey will continue in 2016 and beyond. Jody Houser, Francis Portela, and Marguerite Sauvage did a masterful job introducing Faith to a whole new audience, and now we’re glad to welcome Valiant-exclusive artist and extraordinarily talented storyteller Pere Perez to the Faith family for her first ongoing series – a benchmark achievement if there ever was one.”

Created by former Marvel Editor-in-Chief Jim Shooter (Secret Wars) and Eisner Award-winning writer and artist David Lapham (Stray Bullets) in Valiant’s acclaimed HARBINGER series in 1992, Faith has long been a central icon of Valiant’s award-winning publishing line. Then, in January 2016, Faith took her long-awaited, much-demanded first step toward solo stardom with FAITH #1 (of 4) – a groundbreaking debut that quickly became the first and biggest breakout hit of the New Year from any major comics publisher. In the weeks since, Faith’s solo debut has garnered near-universal critical acclaim; generated attention from some of the world’s biggest media outlets including the BBC, the Guardian, the Huffington Post, NPR, People, Today, the Washington Post, and dozens more; and become the first series of 2016 to reach a much-vaunted fifth printing – making it one of only a handful of hit series in the past decade to achieve that pivotal benchmark of fan and commercial demand.

“Faith isn’t just a superhero anymore. In a very short time, she’s become a true pop culture phenomenon,” said Valiant CEO & Chief Creative Officer Dinesh Shamdasani. “Finally, the world is realizing what we at Valiant have known all along: that in a medium populated by characters that can often seem dark and cynical, Faith represents a ray of hope and optimism that resonates far beyond the printed page alone. She truly is a hero in every sense of the word and, at her core, she represents the best that superheroes and comics as a whole have to offer to the world.”

In a city under siege by robots, aliens, monsters and, even worse, celebrities, there is only one woman the people of Los Angeles can count on: the stratospheric superhero called Faith! Aspiring reporter by day and dedicated crime-?ghter by night, Faith has tackled every obstacle in her path with confidence – like those crushing deadlines at work, the long-distance boyfriend half a world away, and the missing back issues that plague her comics collection! But, unbeknownst to her, Faith is about to collide with the one force she never saw coming: an up-and-coming super-villain bent on snuffing her out once and for all! But who is lurking behind the mask of her new foe…and could they be the one person capable of rendering Faith powerless?

On July 20th, don’t miss history in the making when the colossal comics milestone of the summer arrives with the brand-new FAITH #1 – featuring covers by a staggering cast of comics talents, including Kevin Wada (She-Hulk), Jelena Kevic-Djurdjevic (DIVINITY), Cary Nord (X-O MANOWAR), Emanuela Lupacchino (Superwoman), Pere Perez (HARBINGER WARS), Kano (Gotham Central), and Colleen Coover (Bandette)! Jump on on board here and find out why Valiant’s high-flying hero has captured the imagination of the world – and inspired a whole new generation of comics fans – when FAITH #1 hits comic shops everywhere on July 20th!

Plus: Go back to the beginning and relive Faith’s headline-grabbing solo debut with the FAITH VOL. 1: HOLLYWOOD AND VINE trade paperback collection – also on sale in July! Re-presenting all four issues of the sold-out limited series that catapulted HARBINGER’s leading heroine into superhero stardom for just $9.99, get primed for Faith’s first ongoing series here as all-star creators Jody Houser, Francis Portela, and Marguerite Sauvage begin the story that made Faith a full-on comics sensation!

And look for the precedent-setting FAITH #1 (of 4) FIFTH PRINTING – on sale on April 27th alongside the final issue of Faith’s solo mini-series debut in FAITH #4 (of 4)!