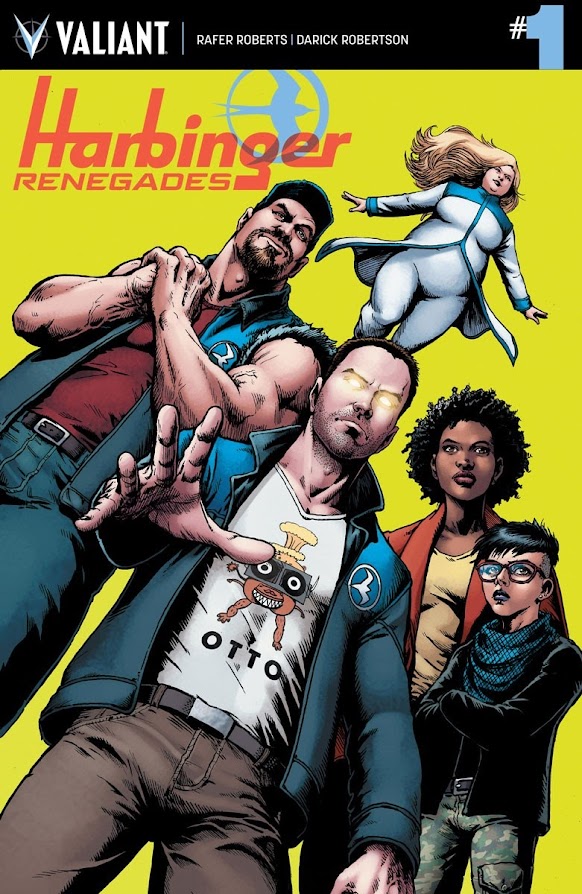 The kind folks at Valiant Entertainment have supplied ComicList with their solicitations for comics and other products featured in the September 2016 Previews, scheduled to ship starting November 2016.

Anyone you know could become a psionically powered “harbinger” with the potential to reshape the course of human history. Your neighbor. Your boss. Your best friend. Your kids.

Six months ago, a secret team of renegade whistleblowers leaked the existence of these extraordinarily dangerous individuals to a stunned world. Today, all across the country, crude, DIY psiot activation attempts have left hundreds brain damaged…or worse. The emergence of a new psiot in a community often leads to riots and mass violence. Gun sales are through the roof.

America is terrified of what could happen next.

With this revolutionary upheaval now in motion, Kris Hathaway, John “Torque” Torkelson, Faith “Zephyr” Herbert, and Peter Stanchek are about to discover their calling. Together, the HARBINGER RENEGADES are moving from town to town, building their ranks, and subverting authority one mind at a time…and setting out to prove once and for all that behind their power, there has always been a purpose.

This November, the most fearless superteam in comics is going underground for AN ALL-NEW ONGOING SERIES from Harvey Award nominated writer Rafer Roberts (A&A: THE ADVENTURES OF ARCHER & ARMSTRONG) and superstar artist Darick Robertson (Happy!,The Boys)!

Fifteen years ago, the world’s most famous soccer star and his former supermodel wife –pregnant with their unborn child – disappeared without a trace. The world believes they are dead… But, in reality, their private jet crash-landed on a mysterious, unknown island ruled by prehistoric creatures from another time…

This is the story of how they lost their humanity.

On November 2nd, just days before Election Day 2016, legendary writer Louise Simonson and Harvey Award-nominated artist Pere Pérez present history in the making with a presidential milestone like no other! Faith Herbert, star of the highest selling independent superhero debut of 2016, is a shining beacon of optimism in a challenging world. Her day job as a blogger and journalist is about to bring Faith face to face with Democratic Presidential nominee Hillary Clinton…but its her daring alter ego as Los Angeles’ leading superhero that will have to save the day when a new threat emerges to imperil a pivotal moment that has all of America watching!

There are more than eight million people in New York City. And every single one of them just became Bloodshot.

With the flip of a switch, Project Rising Spirit has just infected every man, woman, and child in New York City with a designer “nanite virus,” instantly transforming them into hard-coded killing machines.

Now, block by block, the citizens of America’s greatest metropolis are falling prey to their own destructive urges…and Bloodshot is the only soldier tough enough to go head-to-head with the entire Big Apple gone bad! With the humanity of an entire city on the line, Bloodshot is waging a one-man assault on Manhattan to root out the source of this machine-made infection before it hits the heartland… but will bullets and brute force be enough to stop the spread of a pandemic deadlier than anything in human history?

The city that never sleeps is about to get a wake-up call! Lock and load with New York Times best-selling writer Jeff Lemire (Old Man Logan, Moon Knight) and blockbuster artist Doug Braithwaite (NINJAK, ARMOR HUNTERS) as the most hostile comics event of the year heads into the heart of the concrete jungle!

At the border between civilization and the magic-laden lands beyond, Rome’s first detective is haunted by violence and visions of dark forces that defy all sense…

Antonius Axia’s disturbing investigation in the frontier colony of Britannia deepens…and with each disturbing new clue he uncovers, the farther his mind sinks into disarray! Connecting the clues behind the grisly rumors of horror in the empire’s northernmost reach, Antonius must gain an ally as dangerous as the darkness that now surrounds him. But who is this mysterious new partner, and will she lead Antonius toward the bright light of truth and salvation…or into the cold flame of eternal damnation?

It’s a hell of a day in the neighborhood.

The darkness bubbling beneath the miraculous town of Rook, Michigan is beginning to surface. As Generation Zero closes in on the vicious force abducting and killing teenagers, they quickly discover that this self-proclaimed utopia has been hiding a deep and disturbing secret that could destroy them all! But as the truth takes shape, will this reformed strike squad bring their first case to a close peacefully…or with a bang large enough to register on the Rictor scale?

To the death with Dr. Silk!

Far in the future, it’s a race against the clock as two longtime allies – Ninjak and the Eternal Warrior – reteam to prevent Dr. Silk from conquering the secrets of life, death, and everything that lies in-between! But will their united might be enough to stop the lethal combination of Silk’s technical prowess and criminal psychopathy? Meanwhile, in the present, the Deadside cancer consuming Colin King presents more visions of the dark future yet to come… Will his battle across two timelines soon come full circle?

A&A: THE ADVENTURES OF ARCHER & ARMSTRONG #9

At long last, Valiant’s gallant adventurers have finally located Armstrong’s long-missing wife…in that dreaded land that dare not speak its name: Florida! But after centuries of thinking that his near-immortal bride, Andromeda, was just a booze-induced hallucination, how will Armstrong make up for years of lies, losses, and infidelities? And, as if that wasn’t enough, a nefarious new force is about to release an army of bathsalt-using “Florida Men” to finish off Archer & Armstrong once and for all!

It’s a true story (not really) ripped from today’s headlines (pretty much)! Pack your Crocs and don’t skimp on the lotion because the Sunshine State is about to hit Archer & Armstrong like a bad seafood buffet…and we only have Harvey Award-nominated writer Rafer Roberts (HARBINGER RENEGADES) and acclaimed artist Mike Norton (Revival) to blame!

WRATH OF THE ETERNAL WARRIOR #13

After countless centuries apart, the Earth’s Fist and Steel has finally reunited with his long-lost son, Kalam. But before this father and son can truly find peace, they must first face the impossible…and escape from death itself! As unimaginable terrors rise to prevent Earth’s immortal champion and his scion from returning to the land of the living, can the Eternal Warrior conquer eternity to save the boy he once thought lost…or will his transgressions against the natural order trap them forever at the far end of eternity?

Bloodshot’s nanites made him a nearly unstoppable killing machine. His enhanced strength, speed, endurance, and healing made him the perfect weapon, and he served his masters at Project Rising Spirit — a private contractor trafficking in violence — very well. Now, Bloodshot is a shadow of his former self. He lives in self-imposed exile, reeling from the consequences of his past life and the recent events that nearly drove him mad. But when a rash of shootings by gunmen who appear to look just like Bloodshot begin, his guilt will send him on a mission to stop the killers, even if it means diving head-long into the violence that nearly destroyed him.

Rocketing out of the pages of 4001 A.D…the present and future of Valiant’s greatest heroes come together in four essential standalone chapters at the heart of the blockbuster comics event of the year!

Blast two thousand years into the future as the never-before-told history of
New Japan’s dominion over Earth and the future fates of X-O Manowar, Bloodshot and Shadowman stand revealed. Then, witness the battle- scarred debut of the boldest new hero of this century or the next when War Mother makes her history-shattering debut! The future starts now as all-star writers Robert Venditti, Jeff Lemire, Jody Houser, Rafer Roberts, and Fred Van Lente join visionary artists Clayton Henry, Doug Braithwaite, Robert Gill, and Tomas Giorello to bring the Valiant Universe barreling into the 41st century!

Witness the last stand of Earth’s greatest champion in “LONG LIVE THE KING!”

They’re here! The Torment – a world-devouring race older than history itself — has
arrived on Earth. And now, all that stands between our existence and complete annihilation is Aric of Dacia, heir to the Visigoth throne and wielder of the X-O Manowar armor! But as the Torment unleash a wrath unlike anything the galaxy has seen, even Earth’s most powerful protector will find himself hopelessly outmatched.
With humanity standing on the brink of extinction, X-O Manowar must turn to his greatest adversary for help – the savage Commander Trill!