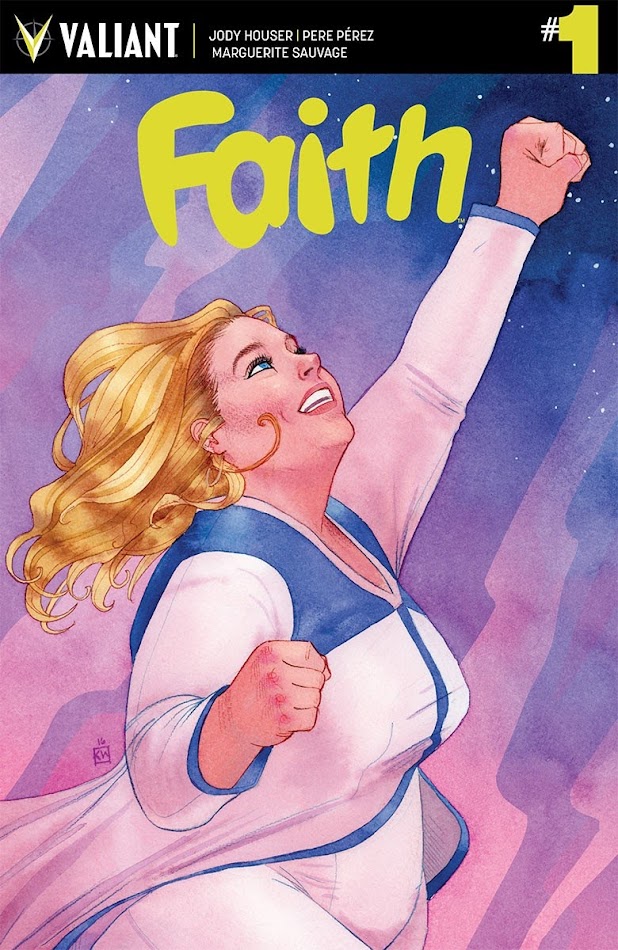 The kind folks at Valiant Entertainment have supplied ComicList with their solicitations for comics and other products featured in the May 2016 Previews, scheduled to ship starting July 2016.

AN ALL-NEW ONGOING SERIES! Because you demanded it…the high-flying hero that captured the imagination of the world is back with a colossal new comics milestone!

In a city under siege by robots, aliens, monsters and even worse… celebrities, there is only one woman the people of Los Angeles can count on: the stratospheric superhero called Faith! Aspiring reporter by day and dedicated crime-fighter by night, Faith has tackled every obstacle in her path with confidence – like those crushing deadlines at work, the long-distance boyfriend half a world away, and the missing back issues that plague her comics collection! But, unbeknownst to her, Faith is about to collide with the one force she never saw coming: an up-and-coming super-villain bent on snuffing her out once and for all! But who is lurking behind the mask of her new foe…and could they just be the one person capable of rendering Faith powerless?

Jump on board now to find out why Valiant’s one-of-a-kind hero is inspiring a whole new generation! Be here as FAITH moves from her sold-out mini-series…and into the history-making debut of her first-ever ongoing series!

A&A: THE ADVENTURES OF ARCHER & ARMSTRONG #5

A&A’s whirlwind ongoing series is hitting the town with the one and only FAITH! With Armstrong on the road, Archer is taking some much-needed personal time…and bringing his long-distance Romance with Los Angeles’s number-one superhero off of FaceTime and into the real world! As these friends take their relationship to the next level, will romance conquer all? Or will they still find the time to brawl with some loan sharks? When a teenaged martial arts expert and high-flying psiot get together, anything goes!

Come on board here with the swooning standalone adventure of the summer as paramour extraordinaire Rafer Roberts and Eisner Award-winning artist Mike Norton bring you THE ADVENTURES OF ARCHER & FAITH! More crossbows than Sleepless in Seattle! More fistfights than The Notebook!

The countdown to X-O MANOWAR #50 continues as “LONG LIVE THE KING” escalates!

They’re here! The Torment – a world-devouring race older than history itself — has arrived on Earth. And now, all that stands between our existence and complete annihilation is Aric of Dacia, heir to the Visigoth throne and wielder of the X-O Manowar armor!

But as the Torment unleash a wrath unlike anything the galaxy has seen, even Earth’s most powerful protector will find himself hopelessly outmatched. With humanity standing on the brink of extinction, X-O Manowar must turn to his greatest adversary for help – the savage Commander Trill!

Plus: The X-O MANOWAR #50 COUNTDOWN GIVEAWAY continues right here! Each issue of “LONG LIVE THE KING” comes bagged with one of 50 micro-prints – featuring artwork from a who’s who of comic superstars – or even one-of-a-kind original art!

Live. Die. Rejuvenate. Each day, Bloodshot and his fellow castaways from Project Rising Spirit awake to find themselves hunted by the unstoppable engine of destruction called Deathmate. And each day, they die…only to begin their escape once more after the nano-technology inside them repairs their fatal injuries. As Bloodshot and his new teammates begin to understand the brutal logic behind their island prison, will the biggest threat to their survival be the horrors that await in the jungle around them…or each other?

New York Times best-selling writer Jeff Lemire (Old Man Logan) and superstar artist Mico Suayan (BLOODSHOT REBORN) lead the hunt for the secrets behind Bloodshot’s past and future here in the next unstoppable chapter of the summer’s electrifying Valiant blockbuster!

This summer…sail back to BLOODSHOT ISLAND for a pulse-pounding director’s cut presenting Jeff Lemire and Mico Suayan’s action-packed masterwork in pristine black and white!

Get up close and personal with the fearless Bloodshot epic of the summer with this 48-page special, stripping down BLOODSHOT REBORN #14 to pencils, inks, and letters alone! Spotlighting Mico Suayan’s brutally immaculate pencil artwork alongside Lemire’s complete script, Valiant’s next essential Director’s Cut must be seen to be believed! Experience BLOODSHOT ISLAND in the purest form possible right here with an all-access presentation of the savage first issue featuring the first appearance of the character that has everyone talking: DEATHMATE!

The war against Father turns in favor of the 41st century’s revolutionary heroes as Rai finds his long-lost friends aboard the monstrosity that has become New Japan. But even together, can Rai and his allies stand against Father’s defenses? And can they rescue what remains of New Japan before it crashes down to Earth and destroys everything…and everyone?

As Father erects his floating kingdom of New Japan, nothing will stop him from asserting complete control over the millions who now fall under his gaze! And to ensure total subjugation, he will create the greatest “spirit guardian” New Japan has ever known – the fourth Rai! But as Father unleashes his most powerful warrioryet, has even he gone too far in his bid for absolute power?

Join 4001 A.D. mastermind Matt Kindt and fan-favorite artist CAFU as they continue to unearth the missing links connecting the world of today with 4001 A.D.’s empire of tomorrow!

A blood sacrifice is made, a war looms, and the Deadside…rises!

In the synapse-shattering world of the future, witness the dawn of the dead’s greatest hero and the fate of a young girl who may be humanity’s only hope! As Rai leads a revolutionary insurrection against the forces of New Japan, the legendary hero called Shadowman returns to fight another day in the year 4001 A.D.!

Valiant rising stars Jody Houser (FAITH), Rafer Roberts (A&A: THE ADVENTURES OF ARCHER & ARMSTRONG) and Robert Gill (BOOK OF DEATH) reveal the dark side behind the 41st century’s coming conflict…and bring you the future of the Deadside today!

WRATH OF THE ETERNAL WARRIOR #9

The darkest hour of the Eternal Warrior’s long life has arrived with blood and torment. Behind every wall and around every corner of the Dying One’s “LABYRINTH,” new and sadistic ways to burn, tear, and break Gilad Anni Padda await. As the Eternal Warrior’s greatest enemy inches closer to unlocking the secret of never-ending life, is all hope lost for Earth’s immortal soldier?

Myshka’s plot to reengineer the globe in Russia’s favor is all but complete. Will Abram Adams – the god-like being now called Divinity – stand against his former comrade…or, together, will they reshape the world as we know it with hammer and sickle in hand?

The sold-out sci-fi epic that redefined the Valiant Universe charges into a showdown for the fate of reality itself as New York Times best-selling writer Matt Kindt (4001 A.D.) and explosive artist Trevor Hairsine (X-Men: Deadly Genesis) reach a defining moment for comics’ most captivating new hero!

The last stand of Colin King!

Roku has completed her mission. She has destroyed, discredited, and defeated the MI-6 operative known as Ninjak. But she didn’t account for one crucial component… the man behind the mask and gadgets, Colin King! With everything on the line, and nothing left to lose, Valiant’s death-defying super-spy strikes back at his sworn enemy to take back the life he once knew! But even if his body can survives the suicidal confrontation, can his mind withstand the untold torment Roku has prepared?

Valiant’s most-demanded hero steps out of HARBINGER…and into an all-new adventure!

Orphaned at a young age, Faith Herbert – a psionically gifted “psiot” discovered by the Harbinger Foundation – has always aspired to greatness. But now this once ordinary teenager is taking control of her destiny and becoming the hard-hitting hero she’s always known she can be – complete with a mild-mannered secret identity, unsuspecting colleagues, and a day job as a reporter that routinely throws into her harms way! Well, at least she thought it would… When she’s not typing up listicles about cat videos, Faith makes a secret transformation to patrol the night as the City of Angels’ own leading superhero – the skysoaring Zephyr!

But flying solo is going to be tougher than she ever thought when Zephyr uncovers a deep-rooted alien conspiracy. Two-bit burglars and car thieves are one thing, but when the world needs a hero to stave off a full-blown extraterrestrial invasion, will Faith find herself in over her head…or ready for her biggest challenge yet?

Many years from now, Los Angeles has become a post-apocalyptic wasteland and the once unstoppable killing machine known as BLOODSHOT has become THE ANALOG MAN.

Bloodshot’s taken on a new role as the protector of a small town, eking out a subsistence existence with the great love of his life – Magic – and protecting a group of stragglers who’ve weathered the storm. But when a gang of marauders arrives, the settlement’s survival is threatened, and Bloodshot is forced to bring justice to the distorted and disjointed badlands of the Valiant
Universe!

New York Times best-selling writer Jeff Lemire (Extraordinary X-Men) and artist extraordinaire Lewis LaRosa (The Punisher) bring down the hammer on a metal tearing vision of the future that must be seen to be believed!

The world’s most powerful team of mercenaries is on the defense…as an elite international kill squad led by Livewire and H.A.R.D. Corps’ Major Charlie Palmer descends to destroy Imperium’s stronghold!

Toyo Harada will save the world…if he doesn’t doom it first. The revolutionary disruption that Harada and his team have launched – by deposing tyrants, housing refugees, and feeding the poor – has come at the expense of the world’s wealthiest nations. When the planet’s leaders have had enough, it will be decided: Toyo Harada must die. Now a crack unit of operatives will stand against Harada on the global stage…with his own former pupil, Livewire, taking him head-on.