Touching Down in August: Do You Have Teen Titans Keys?

So you checked out the Titans TV series and you know it is coming in August, but what Teen Titans keys to buy? There are two comics that stand out: one for the broad appeal and the other for rarity. Can you guess what the second one is? Discounting the huge fanbase for Nightwing,  I think the fan favorites are Beast Boy and Cyborg. Especially after that Zack Snyder cut, huh folks? What are the return trends of the first Beast Boy and the first Cyborg? In a head-to-head matchup, who is the winner? 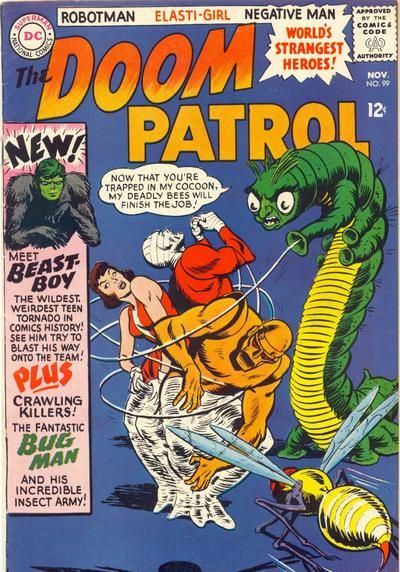 Doom Patrol #99 is the first appearance of everyone’s favorite Beast Boy. It was created in 1965, by the script team of Arnold Drake, Jack Schiff, and Henry Boltinoff, among others.

Boltinoff stands out in this time period as prolific to me and is worthy of further investigation in a future blog.  The artist team consisted of Bob Brown, Sheldon Moldoff, and Henry Boltinoff.

Beast Boy appears, “One night the Doom Patrol returns to their base to find that it’s been trashed by what appears to be various different animals; Convinced that the attacker will return, the Doom Patrol set up a trap for them (Source: MyComicshp).”

This is the first appearance of Cyborg, Raven, and the stunning  Starfire. DC Comics Presents #26 was created in 1980 by Jim Starlin, Marv Wolfman, and Bob Rozakis. The art team also consisted of Jim Starlin, George Perez, and Jose Delbo. Notably, my personal favorite, Dick Giordano, was one of the inkers!

This book is huge because Cyborg appears in two franchises: first, Justice League, and second, Titans. Both of these are incredibly successful and showcase the Titan fanbase and world that folks love. Even though Cyborg has not appeared on the TV series as of yet. Who knows what season three holds?

The triple key obviously pulls down a great deal more interest than the Beast Boy key.  Which makes sense because there are simply more of the DC Comics Presents #26 on the market for people to buy.

Though Doom Patrol #99 is not as popular, it is plenty rare. Only 375 total copies exist in the CGC Census inventory. By way of comparison, the Bronze Age book has 3739 copies outstanding.  This is why the grade of 6.5 is worth the same price (roughly) as a 9.6 grade in Bronze Age.

Further, look at the returns; they are neck and neck. In this matchup, they literally have the same two-year return.  According to GoCollect, 44 people sold Doom Patrol #99 in the last year.  DC Comics Presents #26 had 174 sales and the upgrades for this book have dominated throughout 2021. This is probably due to the hype with the Snyder cut.

We don’t need to detangle three Mother-Boxes to figure out the Bronze Age book is simply more popular. This could be an indication that modern books are coming into their own. We have seen price rises in the Bronze, Copper, and Modern Age over the last two years that dwarfed anything before.

When Titans 3 comes roaring into living rooms across America this August 12th, keep an eye on your Teen Titan keys. This upward trend is likely to continue…

Track the sales of all of your favorite books with an upgrade to GoCollect PRO!

The Heroes Union universe continues in THE BLUE BARON “EVERYTHING OLD IS NEW AGAIN!”

I like both. Never was able to get a Doom Patrol 99. I tried to sell my NM raw copy of DC Comics Presents 26 several years ago for $150. I’m glad nobody bought it. Hehe
Its a great key issue but I never expected prices to jump this high on it.
What’s your take on Brave and the Bold 54 and 60? The original incarnation of Teen Titans. I think these are also good books even though that team is not the same version as the more popular one in media.

Where would DDCP 26 be if it had a great Teen Titans cover, rather than just a tiny picture of one? I contend it would be DC’s most sought after, and most expensive, Bronze Age key.