The dirty little secret of Secret Wars #1 was that it was everywhere after 1984. If you purchased comics or even went near a comic shop you would see one. At that point, they had printed so many and fans were seriously disappointed with the overall story, though the book was a financial home run. There are a few interesting storylines, and certainly, the creation of  Spidey’s black suit was important. When it first published this book was initially popular and everyone had a copy.  That was 1984 and we collectively read it and abruptly forgot it.

Now we super leap forward 37 years and suddenly this book is hot! How hot you ask? Secret Wars #1 is “hotter than Georgia asphalt.”  To rank it on a scale of  “1 to 10” with “10” being  Star Wars #1 from 1977. While the number “1” would be the first appearance of the New Suicide Squad. Comparatively, Secret Wars #1 ranks about an #8 on  Lula’s “Georgia asphalt” scale (Source: Wild at Heart Directed by David Lynch). What has happened to Secret Wars #1 over the last year? How much explosive growth have we seen and are going to see in the near future? 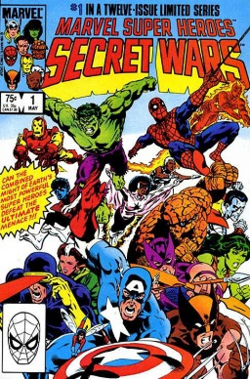 t begins across many different comic book series. To name a few: “The heroes leave for Secret Wars in Amazing Spider-Man #251, Avengers #242, Captain America #292, Fantastic Four #264, Incredible Hulk #294, Iron Man #181, and Uncanny X-Men #180.” These “tie-ins” really hyped up the book and help bring all the different readers of  Marvel together all buying Secret Wars #1.”

You had fans of Captain America along with fans of Uncanny X-Men. The result was Secret Wars #1. This smash hit is nowadays seen as a classic.  This book had a script by Jim Shooter and the pencils of Mike Zeck of Punisher fame.  The entire story was designed for Mattel to sell a toy line.  Jim Shooter the Marvel Editor at the time put it well…

We went through a number of ideas for names for the toy line and series. Mattel’s focus group tests indicated that kids reacted positively to the words ‘wars’ and ‘secret’. Okay.

Mattel had a number of other requirements. Doctor Doom, they said, looked too medieval. His armor would have to be made more high-tech. So would Iron Man’s, because their focus groups indicated that kids reacted positively…etc. Okay.

They also said there had to be new fortresses, vehicles and weapons because they wanted playsets, higher price point merchandise and additional play value. Okay.

When time came to actually do it, I realized that only I could write it. (Wiki)

The story went something like this; the being The Beyonder creates a Battleworld in a distant Galaxy and transporters most

of Earth’s superheroes and supervillains to the planet. Why? To test the heroes and villains, for a higher purpose or to claim the last bag of Doritos. I am not sure which.  According to Wikipedia, “Secret Wars #1 was a best-seller published in 1984 and sold more copies than any comic in 25 years.”  However, the critics and many fans hated it!

Now years later this mass-produced marketing gimmick is a “rare” collectible with substantial value. Oh boy. Obviously, some of the marketing worked and now it is a key worthy of hundreds of dollars. Let’s look at the numbers and see what financial demons we can slay…

About 18 months ago, Secret Wars #1 grade 9.8 sold for around $150. I know this because I purchased two 9.8 grade Secret Wars #1s at the time for that price. Leap forward past the horrible year 2020 and into the beginning of 2021 and today that book is valuable. How much? Secret Wars #1 has sold as high as $810 and has returned a whopping positive +228% return (one year) trend!

Now, Secret Wars #1 has two dirty little secrets. First, it was overprinted and too many copies exist. Finally, this Secret War is hotter than “Georgia asphalt”  and has increased in value fourfold from 18 months ago. The Beyonder wouldn’t be afraid to buy a copy, what about you war-speculator?

Did you know you can advertise your business through GoCollect? Click below for details!

ComicList Previews: SONIC THE HEDGEHOG VOLUME 8 OUT OF THE BLUE TP

Recently, I took a look at my collection of Secret Wars that I bought “back in the day”. I just discovered that, with the exception of issue 1, they are all newsstand copies. They are all is pristine shape (although raw). Do you think that will make a difference?