Should you Invest in Krypto?

Should you invest in Krypto? No, not crypto the digital currency, and certainly not Dogecoin (stamped in the shape of a dog); this Krypto is a superdog known to be Superman’s pet in the comic books. Are any of this superpooch’s comic books worthy of investment at this time, or even as future long-term collectible buy and hold ’em?

Further, are Krypto covers a thing? Will they grow in value? Perhaps this canine is simply the doggie snack of DC Comics. Is this powerful pooch, only good for an occasional laugh but not important to Superman’s reality and certainly not worthy of investment?

Krypto (a.k.a. Superdog) was published by DC Comics and is Superman’s pet dog.  ” He is usually seen as a white dog of a generic pedigree and the breed is almost never specified.” -(Wiki)

The Superdog has appeared in animation and recent TV series like Smallville or Teen Titans. I thought he was marvelous in the Teen Titans. I love seeing him toss around bad guys and be a loyal super-companion.

Krypto first appeared in Adventure Comics #210 in March of 1955. He was created by Otto Binder and Kurt swan.

“In his original Pre-Crisis incarnation, Krypto possessed the same powers and abilities as an adult Kryptonian, although his physical abilities were proportionate to his smaller size and species.

He also had super-canine intelligence (approximately human level, though with his canine traits and interests still present); the comics expressed this via the use of thought balloons indicating what Krypto was thinking.” -Wiki 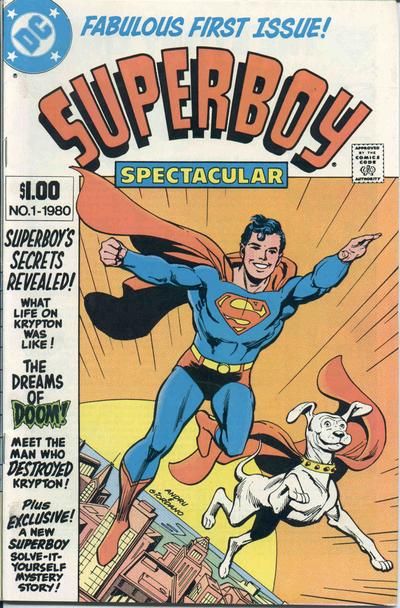 We are going to look at 3 Krypto comic books. The first is Adventure Comics #210, which is the first appearance of Krypto. Then, in the midpoint of Kryptos’s career as a crime fighter back in 1974, Action Comics #440. He comes back after an absence of about 4 years in a two-part Green Arrow backup story in Action Comics #440.

Finally, in the comic series The Superman Family #182, Krypto got his own feature written by Bob Toomey. That run went from early 1977 all the way till late 1978 in December.

For this analysis, we are going to concentrate on the original Krypto. I will leave his remakes of which there were two “new” versions created for another blog.  Additionally, let’s take a look at Superboy Spectacular #1 and Superboy #109, both of which have Krypto cover craziness.

Crypto makes Superman and Superboy more American and relatable than any other activity. After all, what could be more American than a boy and his dog? This script is a fun creation of the zaniness that was going on in DC Comics back in the day. Then, it was really written more for children than young adults. There was a certain amount of fun to the campiness of it. If you want to experience it, try watching Teen Titans on one of the streaming services; you will see Krypto in action!  It’ll give you some idea of how they make a super human dog like Krypto work.

Anyways, as an investment, Krypto is pure gold. The character is iconic, funny, and definitely out of the norm. How does Krypto work as speculation or even an investment?  My favorite pick above is obviously his first appearance in  Adventure Comics #210. It is a little steep at $3600 but has garnered a 35% return over the last year. Further, they ain’t making any more of these. Finally, this is a primary key and should be acquired now while Krypto and most of DC Comics is relatively cheap.

The other four books are minor keys and several have Krypto on the cover. They have had less-than-stellar returns, but this is a good thing for investors, unlike crypto the currency which has had huge swings in profit, and loss.

My advice is to buy this pup’s comic books now and wait. Eventually, DC Comics will bloom and become popular. When DC finally picks up interest; it will explode in value just like Marvel, maybe even more so. Krypto as an investment is solid and worthy of some of your quatloos (Trek reference).

This powerful pooch shouldn’t spend any time in the digital doghouse of speculation wannabees.

Go where no one has gone before with RADIO SPACEMAN

What’s Going On With Halo Infinite?

I think his 2nd app in Adventure #214 is a solid grab right now if you cant afford the 1st app.

Action Comics #440 is also notable for being the 1st Green Arrow by Mike Grell.

Bat-hound and Krypto are in a new animated movie so that will increase interest.
Batman Bat-hound issues 92 (intro) and 97 (2nd appearance) are very expensive.

Krypto is the scooby-Doo of DC comics. We all adore him. The New 52 version was rubbish. 1st appearance of original Krypto is any collectors must find but i have never seen one in a nice enough condition for myself in the raw when searching shops. The cover you show of the Alex Ross Superman 680 is a beauty. A virgin variant would have been the cherry on top. Krypto is much loved by fans.