“Look! Up in the sky! It’s a bird! It’s a plane!” No, it is the price of Action Comics #1 ascending to the stratosphere in value! The first appearance of Superman just sold for a record-breaking $3.25 million. This book sold for over $2 million in June 2018. This demonstrates the strength of the comic book collectibles market at the absolute highest point. Essentially, in three years’ time, the owner of Action Comics (purchased in 2018) made $1.25 million dollars or roughly a positive +62% return.  The sale was at Comic Connect on April 6th.

Certain superheroes are beyond iconic, they are, essentially, game-changers resetting consumer tastes. This particular comic is the first appearance of modern superheroes. To paraphrase Chiun from Remo Williams, “the rest are but shadows, Action Comics #1 is the Sun!” What is the history of this book? How does the company that sold this comic perceive current industry trends? Finally, how does a sale this big impact the overall comic book market?

“According to ComicConnect, the comic book that just realized $3.25 million was tucked away in a stack of old 1930s movie magazines for more than 50 years, helping to reduce the ravages of time. The CGC Census shows only 41 examples of Actions Comics #1 in the Universal grade, with a mere two copies graded CGC 9.0 and a single copy graded CGC 8.5. Another 30 have a Restored grade while one has a Qualified grade (Source: CGC Comics per Comic Connect).”

Can you imagine the shock of finding an Action Comics #1 in a bunch of old movie magazines? That is the ultimate thrill and find of a century, as far as comic books go. I mean, the book looks pristine. This is proof that the Golden Age holds up very nicely against not only inflation and economic turmoil, but also the ravages of time. The structure of how the comics were made, a difference in the presses, ink, and paper used to create a quality item allow these books to survive intact.

According to my comic book presser, Steve Warner, he prefers working with Silver and Golden Age books. “They are iconic art and with sturdy thick paper and most can handle cleaning and pressing. Some Golden Age books are easier to press because the paper reacts better with heat and pressure, though not all. Golden and Silver Age books are iconic and simply works of art and fun to work with. Golden Age books present a challenge as the books have thick paper, but are so old caution is necessary to press correctly.” (Source: Steve Warner Steve’sComicPressing on Facebook) 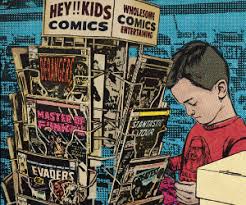 According to the COO of Comic Connect, he believes the comic book as an investment is just getting started. In his words, “With collectible values trending upwards and cryptocurrencies minting new millionaires daily, I fully expect comic prices to continue to rise,” said Vincent Zurzolo, COO, and co-founder of ComicConnect. “I believe that comics remain the most compelling investment with values that are immature in comparison to other categories.”

“This sale was announced on April 6th by Comic Connect. Apparently, they brokered this sale. ” This book is right in trend with every other Golden, Silver, and Bronze Age key I have reviewed over the past three years for GoCollect.  As ludicrous as these comics might be in price, I think we are just seeing the tip of the iceberg for the entire market to continue to grow. I would not be surprised to write another article in two years stating how this book had topped $5 million in sales.

Yep, hold onto your Superman-underoos folks, this ride is just getting started. “It is not a bird, it is not a plane;” it is a rocketship ride to higher prices. This sale of Action Comics #1 will thrust us onto the playing field of much higher prices across the board.

The Posters of Led Zeppelin Reunions