The PUNK MAMBO #1-5 Pre-Order Bundle will feature a free download of A Sound of Thunder’s Punk Mambo Song.

Available only as a pre-order set, the PUNK MAMBO #1-5 PRE-ORDER EDITION BUNDLE – five massively expanded editions following the supernatural adventures of the mystical mercenary for hire – can only be ordered together and must be reserved with your local comic shop by the final order cut-off date of April 1st, 2019!

In her first-ever solo series, Punk Mambo investigates a series of abductions in the New Orleans Gutter Punk scene and stumbles upon a deadlier mystery that takes her – and her otherworldly loa companion – to the haunted shores of Haiti.

Released monthly from April 2019 through August 2019, each 40-page PRE-ORDER EDITION issue comes packed with trade paperback-style extras and bonus content – including creator commentary, behind-the-scenes looks at the creation of the comics, process character designs, and exclusive covers by interior artist Adam Gorham that can’t be found anywhere else – and at for no additional cost!

As a bonus, the first PRE-ORDER EDITION issue will offer a free download of A Sound of Thunder’s “Punk Mambo” song! 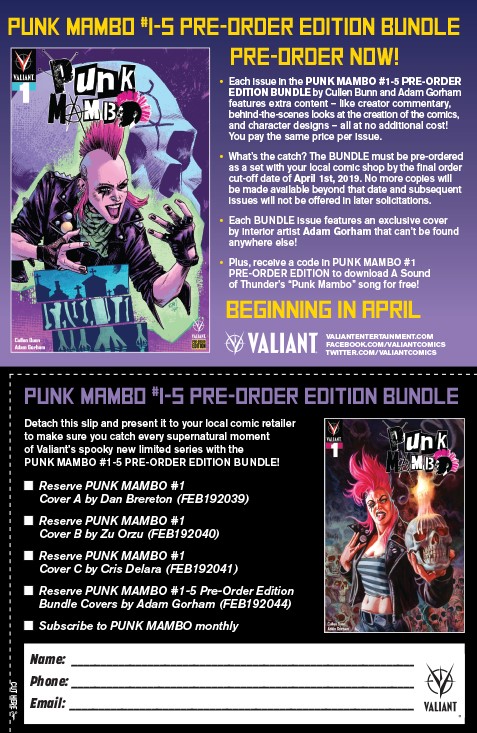