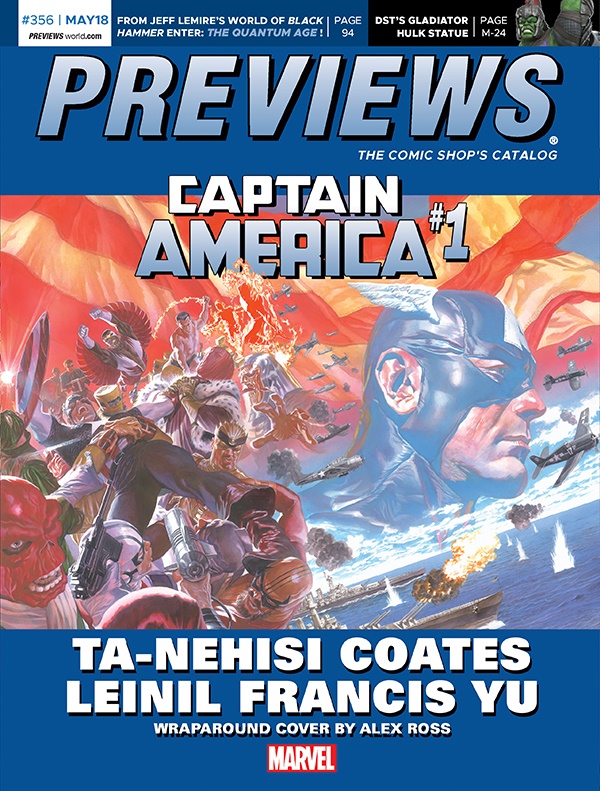 ON OUR FRONT COVER: His reputation in tatters, Steve Rogers faces the greatest challenge of his life in Ta-Nehisi Coates and Leinil Francis Yu’s Captain America series from Marvel Comics.

ON OUR BACK COVER: Chew’s Rob Guillory mixes agriculture, mad science, and monsters in his new Image Comics series, Farmhand.

The May PREVIEWS Features

Movie Month — PREVIEWS celebrates Movie Month, paying tribute to the comics and graphic novels that served as the basis for movies, or vice-versa. Gear up for the summer and look for the Movie Month icon throughout the catalog to find some choice selections for your reading (and viewing) list.

catBUZZ — PREVIEWS shines a special spotlight at some of the blockbuster books and products coming out in the months ahead. This July, distrusted by the world after Hydra’s takeover, Captain America’s reputation is in tatters and enemies seek to exploit that weakness in Ta-Nehisi Coates and Leinil Francis Yu’s Captain America #1 from Marvel Comics. Plus, IDW Publishing begins the climactic chapter of their Transformers run in Transformers: Unicron; Dark Horse’s Berger Books imprint examines the mysteries of a mentally disturbed girl and the mystery that gives her life meaning in She Could Fly; Elvria: Mistress of the Night comes to comics in a campy and wry series from Dynamite Entertainment; the story of the Gelflings continues in BOOM! Studios’ Jim Henson’s Beneath the Dark Crystal; Rob Guillory (Chew) takes us to a world where human organs grow like turnips in Image Comics’ Farmhand; Aspen Comics celebrates its fifteenth anniversary with Soulfire; Archie Comics and DC Entertainment join forces in Archie Meets Batman ’66; and many more products you have to look forward to this summer.

PREVIEWS Exclusive Apparel — Each month PREVIEWS offers comic book fans and pop culture aficionados a selection of t-shirts and other apparel that can only be found in your local comic shop! Just in time for Marvel Studios’ Avengers: Infinity War is the Avengers: Infinity Wars: “I Am Iron Spider” Navy Blue T-Shirt. Plus, two new Star Wars shirts inspired by Solo: A Star Wars story, the Black Panther: “Moonlit” Blue T-Shirt, and the Deadpool: “Logo Splatter” Cardinal T-Shirt. These t-shirts are perfect for the discerning comic book fan.

Indie Edge — PREVIEWS talks to Dafna Pleban, an editor at BOOM! Studios, about the books she’s worked on, including Planet of the Apes and Lumberjanes, as well as the book she’s enjoying today.

All this awaits you in the May edition of PREVIEWS, available on Wednesday, April 25th in print at your local comic shop or specialty store at its regular cover price of just $3.99 or digitally at PREVIEWSworld.com/digital. 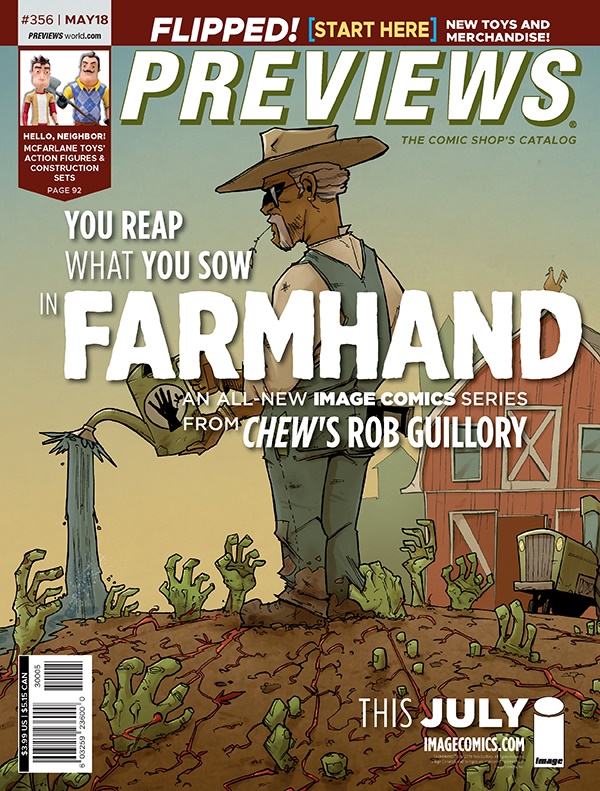 Who is the Blue Marvel?