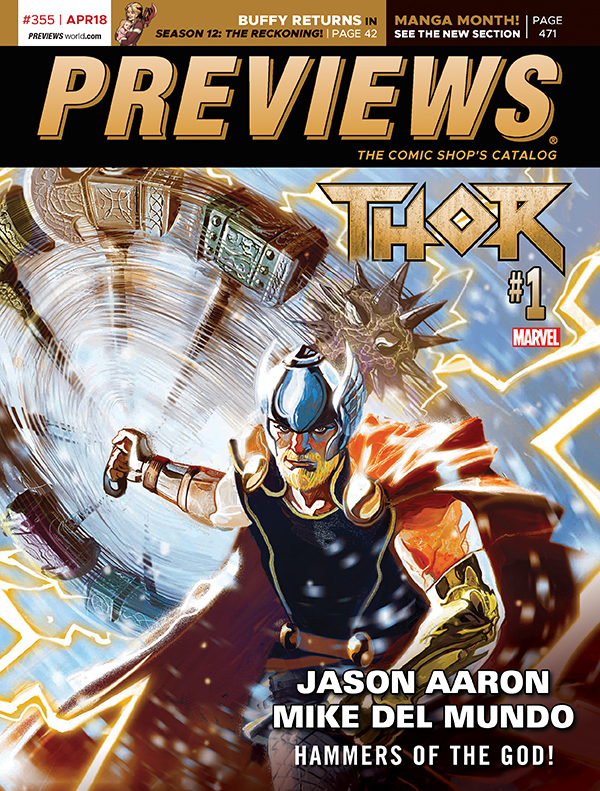 ON OUR FRONT COVER: Thor Odinson returns as the God of Thunder and faces the might of Juggernaut in Jason Aaron and Mike Del Mundo’s Thor #1 from Marvel Comics.

New Format — This month PREVIEWS inaugurates a new flipbook format: comic books and graphic novels on one side, toys and merchandise on the other. Be sure to flip over the catalog this month and find more exciting products to buy in the months to come.

Manga Month —PREVIEWS highlights products from publishers and creators that fuel readers’ enthusiasm for the Asian-influenced art form. Featuring a mix of material imported from overseas and created by American artists inspired by manga, the products offered this month represent some of the best on the market.

BOOM! Studios’ By Night #1
Dark Horse Comics’ Buffy the Vampire Slayer Season 12: The Reckoning #1 and Sword Daughter #1
DC Entertainment’s Justice League #1 and The Man of Steel #1
Dynamite Entertainment’s Charlie’s Angels #1
IDW Publishing’s The League of Extraordinary Gentlement: The Tempest #1
Image Comics’ The Magic Order #1 and The Weathermen #1
Marvel Comics’ Ant-Man and The Wasp #1
New Premier Publishers — Dynamite Entertainment and BOOM! Studios move to the front of the catalog, starting this month, as the newest premier publishers.

catBUZZ — PREVIEWS shines a special spotlight at some of the blockbuster books and products coming out in the months ahead. This June, Thor Odinson wields many hammers as the God of Thunder in Jason Aaron and Mike Del Mundo’s Thor from Marvel Comics. Plus, Alan Moore and Kevin O’Neill cap off their legendary comic book careers in IDW Publishing’s The League of Extraordinary Gentlemen: The Tempest, Joss Whedon’s Buffyverse draws to its epic close in Dark Horse Comics’ Buffy the Vampire Slayer Season 12: The Reckoning, Mark Millar launches his new line of Netflix Comics with Oliver Coipel in The Magic Order from Image Comics, Aaron Spelling’s cult favorite 1970s television series Charlie’s Angels comes to comics courtesy of Dynamite Entertainment, two friends find themselves in a strange world in BOOM! Studios’ By Night, and many more products you have to look forward to this summer.

PREVIEWS Exclusive Apparel — Each month PREVIEWS offers comic book fans and pop culture aficionados a selection of t-shirts and other apparel that can only be found in your local comic shop! The Avengers are assembled to take on Thanos on the Avengers: Infinity War: “Poster Group” Black T-Shirt. Plus, look for the Black Panther: “Jungle Lord” Black T-Shirt, the Marvel: “Thor/Rocket/Groot Black T-Shirt, and the Star Trek: United Federation of Planets Blue T-Shirt. These t-shirts are perfect for the discerning comic book fan.

Indie Edge — PREVIEWS talks to Ron Marz, an industry veteran and the new writer of Aspen’s Fathom, about his career and the books he’s enjoying today.

All this awaits you in the April edition of PREVIEWS, which goes on sale at your local comic shop or specialty store on Wednesday, March 28th with the regular cover price of just $3.99. 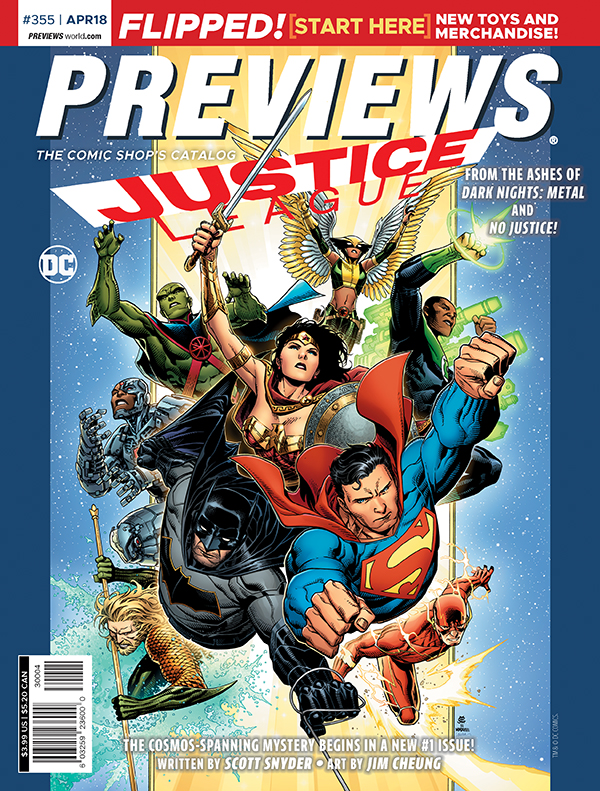