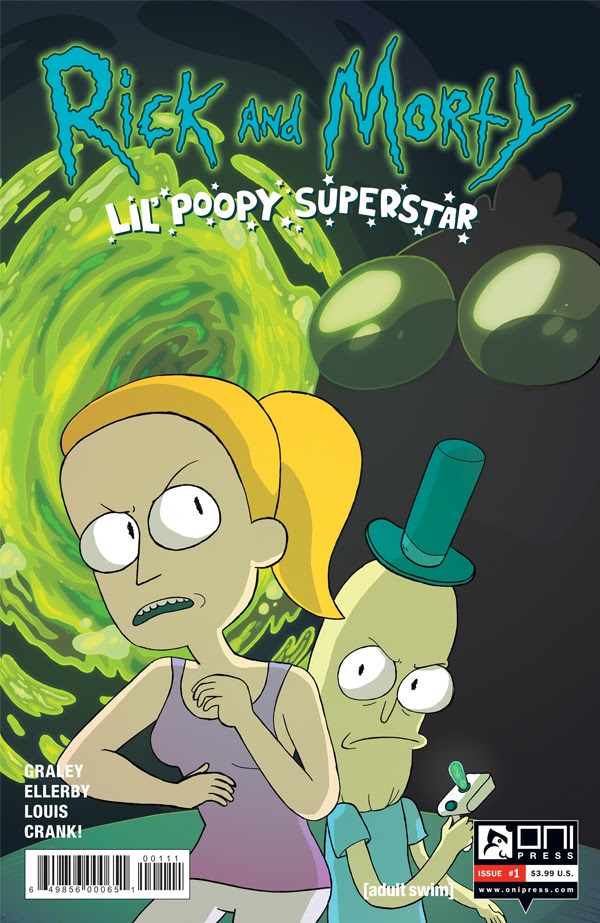 The kind folks at Oni Press have supplied ComicList with their solicitations for comics and other products featured in the May 2016 Previews, scheduled to ship starting July 2016.

Mr. Poopybutthole is in trouble, and he turns to the one person he can trust: Summer Smith! She’s more than willing to help, but is he telling her the whole truth? Written and drawn by Sarah Graley (Our Super Adventure) and colored by Mildred Louis (Agents of the Realm), Summer and Mr. Poopybutthole embark on their very own fantastic adventure across space, complete with jailbreaks, hijackings, and high school prom. Plus! Backup comics featuring good ol’ Rick and Morty, drawn and colored by Marc Ellerby!

Drew is a bullied kid in the Yonkers neighborhood of New York City whose family faces encroaching violence from Russian gangsters. Before his beloved grandfather is killed in an attempt to muscle the family out of the neighborhood, he’s able to pass down to Drew the story of a mysterious but dangerous protector who helped their people during other troubled times. When Drew finds his grandfather kept the secret to creating a golem, is it worth the risk to summon this supernatural avenger to take on the all-too-human darkness swallowing his world?

PRINCESS PRINCESS EVER AFTER

When the heroic princess Amira rescues the kind-hearted princess Sadie from her tower prison, neither expects to find a true friend in the bargain. Yet as they adventure across the kingdom, they discover that they bring out the very best in the other person. They’ll need to join forces and use all the know-how, kindness, and bravery they have in order to defeat their greatest foe yet: a jealous sorceress, who wants to get rid of Sadie once and for all.

Join Sadie and Amira, two very different princesses with very different strengths, on their journey to figure out what “happily ever after” really means—and how they can find it with each other.

Another exciting chapter in this bold and provocative re-imagining of Robin Hood! “There is a passage in Leviticus, long ignored, that forbids a man to lie with another man as he would with a woman.” The truth behind the Merry Men’s exile into Sherwood Forest is revealed, as is Robin’s steamy past with King Richard. But now that Robin’s friends are in danger, the Merry Men are faced with a choice. Stay in Sherwood, where their safety is all but guaranteed, or rescue those held hostage by the violent Guy of Gisbourne?

The stern administrator Matsumoto comes to oversee the final stages of Kaijumax’s repair, and her old-school inflexibility causes problems for Warden Kang. Electrogor dodges patrols on the open seas, heading for his children, while a mourning Officer Chisato gets a surprising new partner. Also: Space graveyards! Sympathy-shaming! Doublecrosses! And… the adorable BeetoGor?

EXODUS: THE LIFE AFTER #6

Start of the second arc! What is AFTER the LIFE AFTER? Jude, Hemingway, Nettie, and Essie find themselves in a whole new world, each left to rebuild their new lives, and decide where they go from here. Also, CULTS, CRAZIES, and CATHOLICISM!

How do you stop a murder that hasn’t happened yet? With [REDACTED] lying in a morgue, a rusted bullet in their brain, it’s a roll of the die.

The truth is here. The crew of the Clarke won’t take it sitting down, though, and make a plan to appeal one last time to the Builders—but one of them has something more drastic in mind. On Earth, the 666 prepare to leave for good—including Blades’ son, Mark.

The heart wants what it wants and sometimes what it wants is to rob New York City of every thin dime. Callie and Mercer have landed in the big apple and, using Mercer’s master list, begin a crime spree the city has never seen. But when their relationship hits a few bumps and the FBI closes in on them, can true love conquer all or will it make a plea deal?

ZIM and Dib are slingshotted to a horrifying future where the earth is ruled by… ZIM? Yes, Emperor ZIM is triumphant, and humanity bows before his greatness. But Invader ZIM decides his future self is a huge ungrateful jerk, and now ZIM must go to war against himself!

Morty is sick and tired of Rick always being a big selfish jerk, so he convinces Rick to go harvest some “space medicine” on an alien planet. They even bring Summer, even though she won’t stop crying about having her heart broken or whatever. But while on the planet, they get interrupted by robobros and some heavy-colognewearing dude named Peacock Jones, so Morty might have to resort to some truly unspeakable tactics in order to get the medicine and get home safely. Plus: backup comics written and drawn by Marc Ellerby!

The gates of the Armageddon have been thrown open, and the world we know has been destroyed. Now, Griselda and her minions journey through the Realm of the Dead in search of the Devil’s Workshop. Giving chase, Drake Sinclair and Becky Montcrief have one chance to stop the Grey Witch before she takes control of the Workshop and recreates the world in her horrific image. Old friends—and old enemies—reappear in this final apocalyptic chapter of the hit series!

Catch up on the adventures of degenerate genius Rick Sanchez and his bumbling grandson Morty as they explore the outer reaches of time, space, and anatomy. This volume features writer Tom Fowler in collaboration with series artist CJ Cannon in a three-issue tale of missing heads, galactic doom toasters, and Jerry screwing everything up (of course). Also included is “Ready Player Morty,” in which Rick takes Morty to a High School Simulation planet, by writer Pamela Ribon and artist Marc Ellerby, as well as a high-action deathball tournament one-shot written and drawn by Tom Fowler. Come for the jokes, stay for the soul-crushing ennui.

Things are looking dire for our valiant heroes. Badlug is on their trail, Misty’s father is marching to battle, and Thrawgg the Unconquered is very close to conquering Gorga and Pete. Will they prevail over the forces of darkness, or will Misty be forced to marry Badlug in order to avert a full-out war?

After surviving one round of Space Battle Lunchtime, Peony is a little more confident in her cooking abilities. And the chefs are warned against sabotaging each other, so maybe this round will go a little more smoothly. OR… the sabotage will continue! And this time, someone may end up in the hospital!

As the entire clan gathers at Twilight’s Bastion, Master Long is ready to make the ultimate sacrifice—but does he have all the stars that he needs? Does he still need to send The Mighty Zodiac after the other stars? Meanwhile, the Moon Rabbit Army approaches while the fate of Great Tiger Ho hangs in the balance!