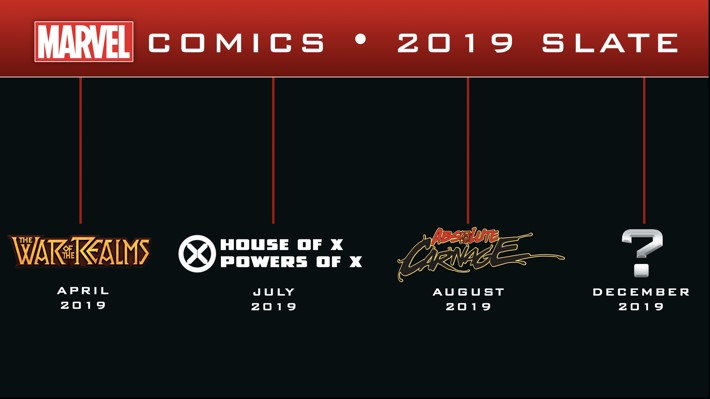 Marvel unveiled its 2019 Publishing Slate at the 2019 Chicago Comic And Entertainment Expo.

Media Release — This weekend, Marvel unveiled its 2019 Publishing Slate to a hall of fans attending Marvel’s Next Big Thing panel during this year’s Chicago Comic & Entertainment Expo. Hosted by Editor-in-Chief C.B. Cebulski along with some of Marvel’s biggest creators, the panel recapped some of the weekend’s biggest Marvel Comics news and teased what’s next in the Marvel Universe – pointing to a yet-to-be-revealed story in December.

“We’re only a few months into 2019, and we’ve already seen how our amazing fans – all of you – are inspiring some of the most outstanding storytelling in comics to date,” said Cebulski. “Whether you choose to read your favorite Marvel books – like the Immortal Hulk, Venom, Avengers: No Road Home…or you want to read about the entire Marvel Universe – there’s truly a story for every type of fan to dive into and experience this year. With that in mind, this new publishing slate for Marvel Comics is a guide to help you see where things are going and choose your favorite stories and characters to follow.”

Each of these standalone series will introduce fans to groundbreaking new ideas and shocking implications for the Marvel Universe, setting the scene for Marvel’s most iconic and popular Super Heroes later this year.

“The Marvel Universe is a tapestry of connections, with hidden clues and incredible details woven into every story. Our new publishing slate highlights the biggest moments for us this year…and we think you all will be excited for the next reveal planned this December,” added Cebulski.

More details on Marvel’s 2019 Publishing Slate will be revealed in the coming weeks.

Starting next month, get ready for some of the biggest stories ever in the pages of Marvel Comics!

This April, Marvel’s WAR OF THE REALMS commences, featuring Marvel’s greatest heroes such as Thor, Captain America, Iron Man, Spider-Man, Black Panther, and Captain Marvel! The dark sorcerer Malekith wages a war that has spread from one otherworldly realm to the next, razing each one to the ground as his armies move from conquest to conquest. Now there’s only one realm left standing: ours.

This July, Marvel’s HOUSE OF X and POWERS OF X will mark the next major milestone in X-Men history. Since their introduction by Stan Lee and Jack Kirby over 50 years ago, fans around the world have followed the extraordinary stories of the X-Men through seminal moments like Giant-Size X-Men, 1991’s X-Men #1, Age of Apocalypse, and New X-Men. Each of these moments introduced a new era for mutantkind – and starting this summer, the world will experience the next seminal moment in the history of the X-Men.

This August, the Marvel Universe will need to survive ABSOLUTE CARNAGE – and no one is safe. Beginning in Free Comic Book Day Spider-Man/Venom #1 (out May 5), Cletus Kasady is back, and he’s deadlier than ever. On a hunt for every Super Hero in the Marvel Universe who has worn a symbiote, Carnage has his eyes on his first victims…starting with some of our favorite Marvel heroes. Everyone is a target!

WAR OF THE REALMS #1 (of 6)
Written by JASON AARON
Art by RUSSELL DAUTERMAN
Colors by MATT WILSON
Cover by ARTHUR ADAMS
On sale April 3, 2019

Blood will flow this June in THE CROW: HACK/SLASH