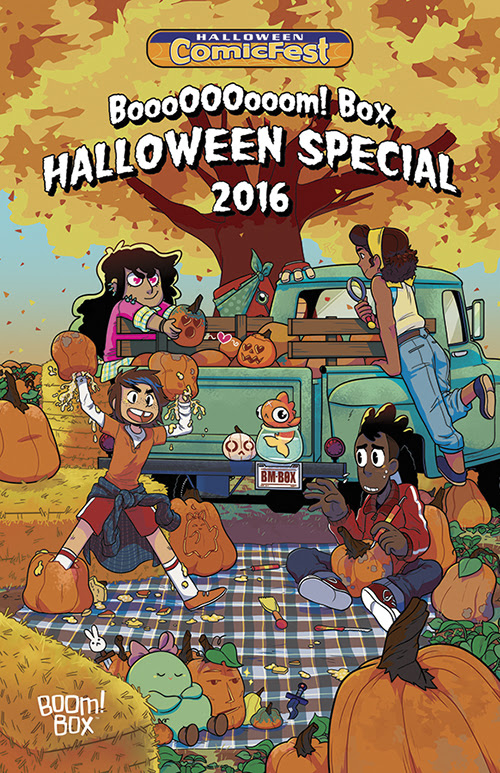 Media Release — In its fifth year, Halloween ComicFest 2016 is set to be the largest fall event yet for comic book shops. Comic book and Halloween fans of all ages can go to over 1,900 participating locations, which will give away more than 2 million free Halloween-themed full-size and mini-comics during the annual Halloween event taking place Saturday, October 29th.

“We’re ecstatic about the 33% increase in total comics ordered from last year, which signals to us that Halloween ComicFest continues to grow as one the industry’s major annual events,” said Halloween ComicFest spokesperson Michael Moccio. “What’s especially exciting is that the mini-comics increased almost 50% from last year. As an industry, turning the next generation into comic book fans is paramount and we’re happy we can contribute to that initiative by distributing the all-ages mini-comics that are perfect to give to trick-or-treaters. No doubt, this year’s increase in mini-comics orders is due to all the great properties featured, such as Archie Comics, Dynamite’s Grumpy Cat, VIZ Media’s Pokémon X&Y Pocket Comics and more.”

Individual stores will host their own special events during the day with activities such as costume contests, appearances by local artists and costumed characters, trick-or-treating, games, giveaways, and more for the whole family to enjoy. Comic shops will also have the HCF mini-comic polypacks available for purchase starting September 28th, containing 25 mini-comics which are great for passing out to trick-or-treaters on Halloween night.

In addition to hosting their own costume contests, stores will also promote “The Greatest Halloween Costume Contest Ever” taking place on the HalloweenComicFest.com website. Anyone who takes a picture in costume holding their free designated HCF comics can enter to win a $500 or $100 shopping spree to their local comic shop plus other great prizes for categories winners. More details will be announced in late September.

ABOUT HALLOWEEN COMIC FEST—Halloween ComicFest is an annual event where participating comic book specialty shops across North America and beyond celebrate the Halloween season by giving away Halloween themed comic books absolutely free to anyone who comes into their shops. The event is the perfect opportunity to introduce friends and family to the many reasons why comic shops are a great destination for Halloween themed comic books, products and merchandise. Visit www.halloweencomicfest.com for more information and to find a participating comic shop.