Get it all in Valiant: The Complete Digital Comic Book Collection 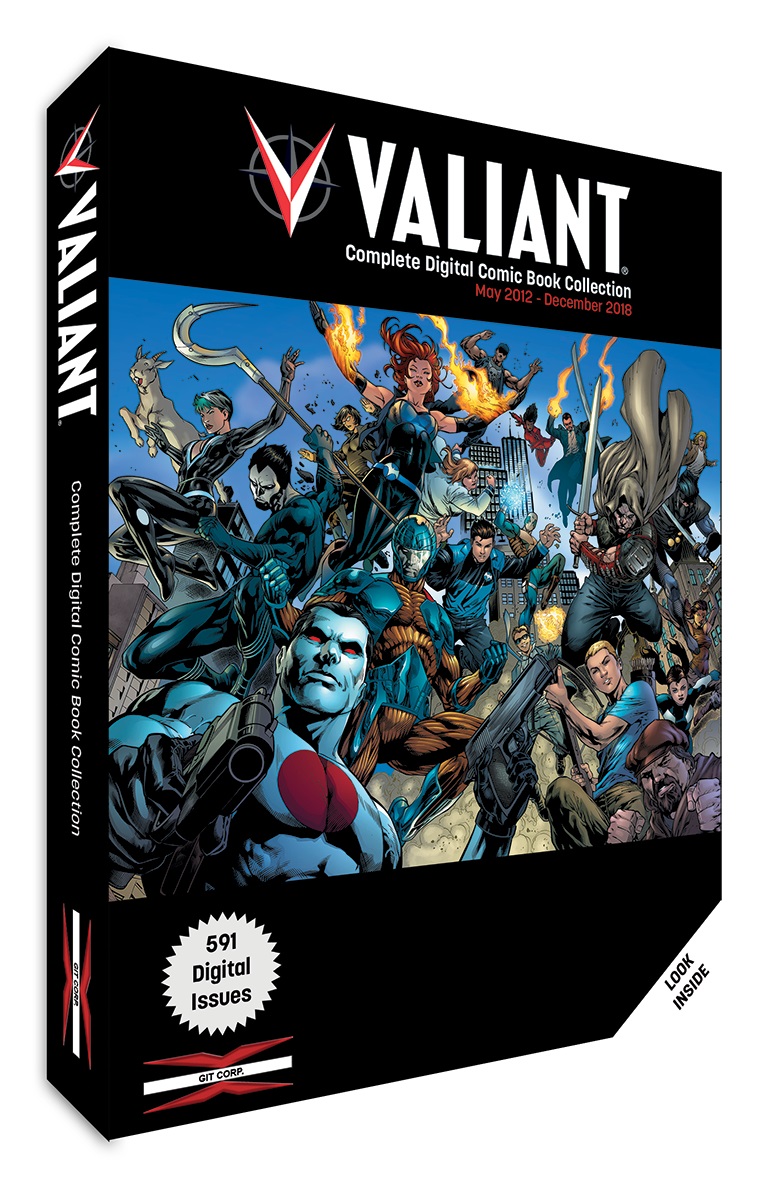 “GIT Corp. is known for their must-have digital collections, and we’re incredibly proud of this impressive release,” said Russ Brown, Valiant’s President of Consumer Products, Promotions & Ad Sales. “This is something our fans have been asking for and we’re glad to finally make it available for them.”

Valiant: The Complete Digital Comic Book Collection packs 591 digital comics on a USB flash drive, featuring every issue that has been digitally released by Valiant Entertainment between May 2012 and December 2018, including exciting adventures starring Bloodshot, X-O Manowar, Ninjak, Archer & Armstrong, and many more! The USB is Windows, Mac, IOS, and Android compatible.

This colossal comics collection releases on May 22, but is currently available for presale here.

A Platinum Limited Edition, which features 12 vivid collectible FILMCARDS highlighting fan-favorite characters, is also available for $90! Only 500 copies will be produced, so purchase here before they sell out!

In 2003, GIT Digital pioneered the digital revolution in the comic book industry with the line of Complete Comic Book Collection DVD-ROMs featuring the heroes of the Marvel Comics Universe.

Long before the iPad (2010) created a demand for digital media, GIT’s Complete Collections offered fans and collectors as many as 600-plus complete issues of these more than forty-year-old heroes on a single DVD-ROM! Their line of bestselling collections included such iconic Marvel titles as The Amazing Spider-Man, X-Men, Fantastic Four, Captain America, The Incredible Hulk, The Avengers, and Iron Man, as well as Star Trek comics, The National Lampoon, MAD Magazine, Archie Comics, and more. The Complete Comic Book Collections were carried by comic retailers nationwide and by major retail outlets in the US and Canada, including Amazon, Apple Stores, Best Buy, Costco, Fry’s Electronics, Office Depot, Office Max, Sam’s Club, Staples, Walmart, and many others.

GIT’s Complete Comic Book Collection DVD-ROMs have themselves become collectibles, with some titles selling on the collector’s market for as much as triple their original price. Now GIT returns with its newest digital collection: Valiant: The Complete Digital Comic Book Collection, containing every comic book published by Valiant Entertainment between May 2012 and December 2018…591 complete digital issues on a single USB flash drive, Windows, Mac, IOS, and Android compatible, and viewable on all your favorite devices.

Valiant Entertainment, a subsidiary of DMG Entertainment, is a leading character-based entertainment company that owns and controls the third largest library of superheroes behind Marvel and DC. With more than 80 million issues sold and a library of over 2,000 characters, including X-O Manowar, Bloodshot, Harbinger, Shadowman, Archer & Armstrong, and many more, Valiant is one of the most successful publishers in the history of the comic book medium. Valiant consistently produces some of the most critically acclaimed comics in the industry and has received numerous industry awards and accolades, including a Diamond Gem Award for Comic Book Publisher of the Year. For more information, visit Valiant on Facebook, Twitter, Instagram, and ValiantEntertainment.com. For Valiant merchandise and more, visit ValiantStore.com.

Walt Simonson’s RAGNARÖK returns in The Breaking of Helheim