G.I. Joe has many interesting rogues, but few as nuanced and entertaining as the deadly mercenary, Zartan. Zartan’s first appearance in comics is worth about $600 in near mint to mint condition. How does Zartan’s comic book compare to his original action figure from 1984? Further, what are some of the nuances to collecting this key action figure? If you have been an avid collector of comics and retro toys for any length of time you have stumbled across G.I. Joe toys in thrift shops. I hope you been buying them regardless of condition.

Why? Because they sell despite the condition. Even action figures with no arms, or tanks with teeth marks from Fido. Worse yet, a missile launcher with no missile. Suffice it to say, I have purchased them all and resold them for a solid profit every time and quickly. Is it G.I. Joe? Then it moves faster than the Strike Force on amphetamines.

“The 1984 Zartan action figure featured UV reactive plastic. In its natural state, Zartan appeared Caucasian, but when exposed to sunlight, Zartan’s skin changed to a dark blue. The action figure also came with thermal sensitive stickers that were applied to Zartan’s chest- and thigh-armor. These stickers changed from maroon when cold, to aqua at room temperature, and blue when hot.” (Source: Wiki)

Zartan is the leader of the Dreadnaughts, a mercenary band that Cobra pays to fight GI Joe. As the leader, he is the most expensive. Zartan was sold with an accompanying “swamp skier” called the Chameleon, which also contained thermal reactive plastic.

If Zartan is in the box he is worth $450 to $675 mint condition with box (Source: Ultimate G.I. Joe Guide Third Edition). Zartan is the first of any of the Gi joe to be melding (plastic glued together sealed).  If O-ring tight fit and intact. His info card was released twice the two versions of the info file card have different details and are worth $45. The completely attached Zartan is about $300, with 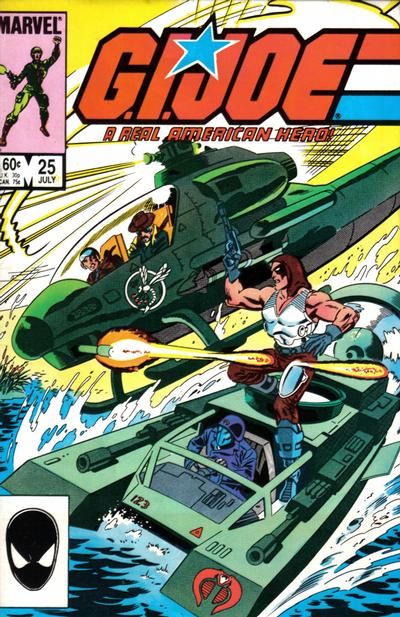 His comic has no such chameleon powers, instead, it just goes up in value. G. I. Joe #25 A Real American Hero, Zartan is the leader of the Dreadnaughts, brother of Zarina. It was created in 1984 by Mike Zeck and Frank Springer art with a script by the able Larry Hama. This book is one of the solid Copper Age keys, especially for G.I. Joe fanatics.

In a head to head match up the larger comic book market makes for an easy resell at very specific price points. Despite the fact that I have given “by the book” value estimates for the Zartan G.I. Joe action figure; it is very much like the Wild West approach to markets, a free-for-all! You can often find it cheaper but at what cost to quality?

The comic book first appearance of ZartanG. I. Joe #25 A Real American Herois more straightforward for investors.  You know the prices, rough return trends, and even the existing inventory with a slabbed Zartan first appearance.  Both are solid collectible pieces that will continue to skyrocket in value.  Zartan’s first appearance comic book is a known quantity and one fantastic Copper Age key to own; or as  Zartan would say buying this comic, “is going to be the achievement of a lifetime…”

Check out all the newest items in the GoCollect swag store! Remember, everything is limited-edition!

A Marvel State of Mind: Do We Expect...