Media Release — BOOM! Studios today revealed a first look at WWE WRESTLEMANIA 2019 SPECIAL #1, an oversized one-shot special that will be available beginning Wednesday, March 27, featuring some of the most iconic and action-packed moments from WWE’s annual pop-culture extravaganza.

You never know what to expect at WrestleMania, and this special is no exception! Writer Andrew Stott and artist Andy Belanger (Southern Cross) highlight the pivotal match between the Brothers of Destruction, Undertaker and Kane from WrestleMania 14. Writer Bill Hanstock (WWE) and artist Hyeonjin Kim (WWE) explore the rivalry between Charlotte Flair and Asuka leading up to their groundbreaking match at WrestleMania 34. Ryan Ferrier (Jim Henson’s Labyrinth: Coronation) and Kendall Goode (WWE) dive into Ric Flair’s unforgettable retirement match against Shawn Michaels at WrestleMania 24.

“Pain and destruction reign in this look at the larger-than-life match between Undertaker and Kane at WrestleMania 14,” said Chris Rosa, Editor, BOOM! Studios. “But that’s just a glimpse of the excitement fans can expect from the array of stories presented in WWE WRESTLEMANIA 2019 SPECIAL #1.”

Print copies of WWE WRESTLEMANIA 2019 SPECIAL #1 will be available for sale on March 27, 2019 at local comic book shops (use comicshoplocator.com to find the nearest one). Digital copies can be purchased from content providers, including comiXology, iBooks, Google Play, and the BOOM! Studios app.

For continuing news on WWE WRESTLEMANIA 2019 SPECIAL #1 and more from BOOM! Studios, stay tuned to www.boom-studios.com and follow @boomstudios on Twitter.

ABOUT WWE
WWE, a publicly traded company (NYSE: WWE), is an integrated media organization and recognized leader in global entertainment. The company consists of a portfolio of businesses that create and deliver original content 52 weeks a year to a global audience. WWE is committed to family friendly entertainment on its television programming, pay-per-view, digital media and publishing platforms. WWE programming reaches more than 800 million homes worldwide in 20 languages. WWE Network, the first-ever 24/7 over-the-top premium network that includes all live pay-per-views, scheduled programming and a massive video-on-demand library, is currently available in more than 180 countries. The company is headquartered in Stamford, Conn., with offices in New York, Los Angeles, London, Mexico City, Mumbai, Shanghai, Singapore, Dubai, Munich and Tokyo.

Additional information on WWE (NYSE: WWE) can be found at wwe.com and corporate.wwe.com. For information on our global activities, go to http://www.wwe.com/worldwide/.

About BOOM! Studios
BOOM! Studios was founded by Ross Richie in 2005 with the singular focus of creating world-class comic book and graphic novel storytelling for all audiences. Through the development of four distinct imprints—BOOM! Studios, BOOM! Box, KaBOOM!, and Archaia—BOOM! has produced award-winning original work, including Lumberjanes, The Woods, Giant Days, Klaus, and Mouse Guard, while also breaking new ground with established licenses such as Buffy The Vampire Slayer, Firefly, WWE, Mighty Morphin Power Rangers, Cartoon Network, and The Jim Henson Company properties. BOOM! will also bring their original series to life through unique first-look relationships with 20th Century Fox for film and with 20th Television for the small screen. Please visit www.boom-studios.com for more information. 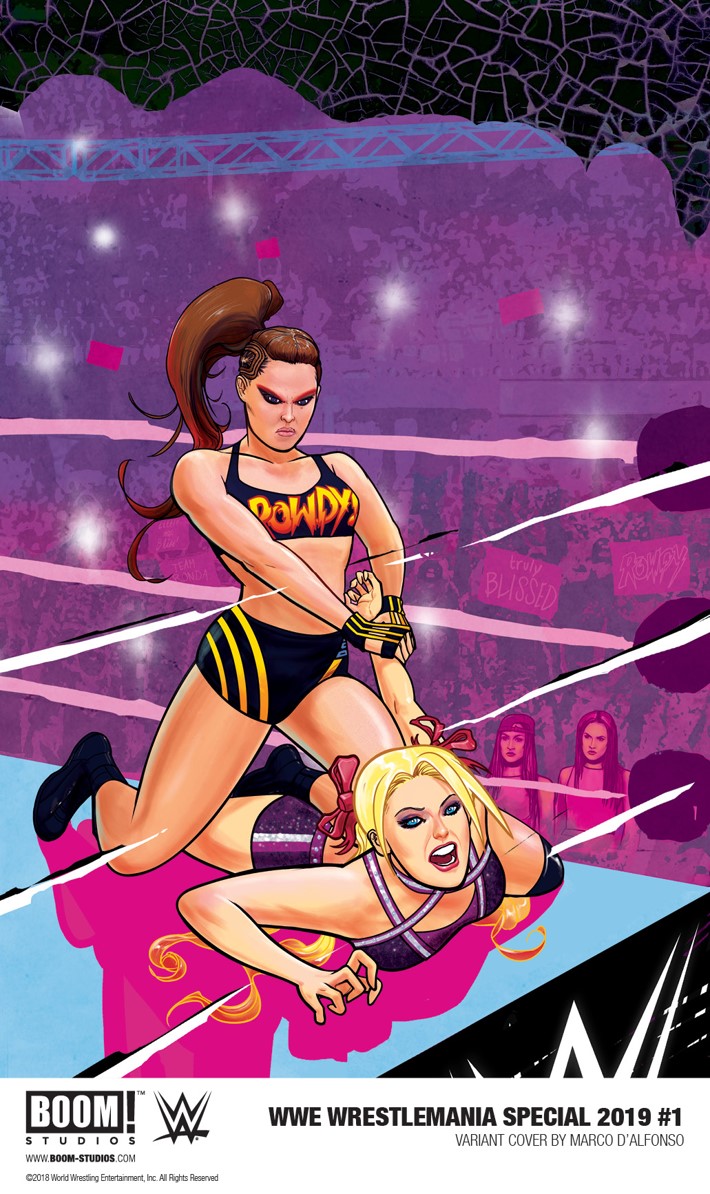 WAR OF THE REALMS: JOURNEY INTO MYSTERY variant covers released