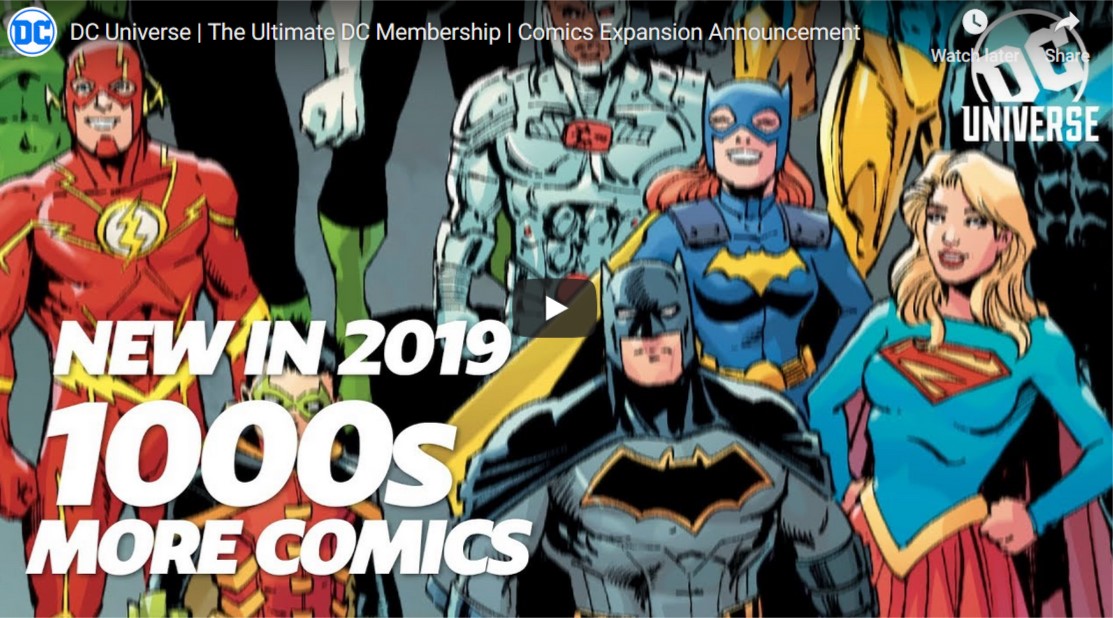 DC has announced an expansion of the comic books available on DC UNIVERSE. While I did not personally count the new books, DC says the amount has “more than doubled”.

Media Release — DC UNIVERSE announced today the first major expansion of its library of comic books since the launch of the digital subscription service in September 2018. All subscribers now have access to thousands of new titles curated from the decades of rich storytelling of iconic superheroes like Batman, Superman and Wonder Woman, that make up the DC library.

The new selection will include titles that fans have asked for along with a significant increase in the number of full story arcs and complete series runs. The overall volume of choices will more than double by the end of March and builds on the list of long-time fan favorites, including thousands of select DC single issues representing legendary story arcs from 80s classics to the New 52, DC Rebirth and beyond.

“When launching DC UNIVERSE we knew the comic reader was an area that we wanted to expand and provide more choice. Fans want a place to discover new titles and the opportunity to enjoy full arcs of iconic and notable storylines from start to finish,” said Sam Ades, senior vice president and general manager, DC Digital Services. “We are listening to fans and responding with an expanded comic book offering that improves the overall DC UNIVERSE experience.”

New Releases Weekly to Include:

DC UNIVERSE is available at $7.99 per month or $74.99 annually (plus taxes, where applicable). DC UNIVERSE is available in the U.S. on iOS, Amazon Fire TV, Android, Apple TV, Android TV and the Roku platform, as well as the web and mobile web, with additional platforms coming soon. To learn more and purchase today, visit dcuniverse.com and follow DC UNIVERSE on social networks including Facebook, Instagram and Twitter.

The Six Printings of TMNT #1