Two books have declined precipitously and fallen from the Copper Age Top 100.  This usually indicates a hit to the bottom line of profit in purged books.  Aliens #1 and Wolverine #1 (first ongoing series) have been battered as if by hurricane IDA.  Can these two books recover their lost glory and resume in the pantheon of the top Copper Age books? Furthermore, how has this impacted their trend returns? The Copper Age has yet to be fully recognized in the comic book collecting industry.  That said, I believe this is “fait acompli” and will eventually be the era for comics published during the 80s and into the early 90s. The Copper Age runs from 1984 thru to 1992. It is a very small age and often is mixed in with the Modern Age of comics.

It is the Copper Age that gives the Modern Age some of its bigger comic book hits, like for instance Amazing Spider-Man #300 published in 1988.

This comic book came out in 1988 and was written by Mark Verheiden with Mark Nelson on inks and pencils. The publisher was Dark Horse. It has fallen 125 ranks to end up at #169th. Talk about a chest-bursting loss of profit potential this is it! 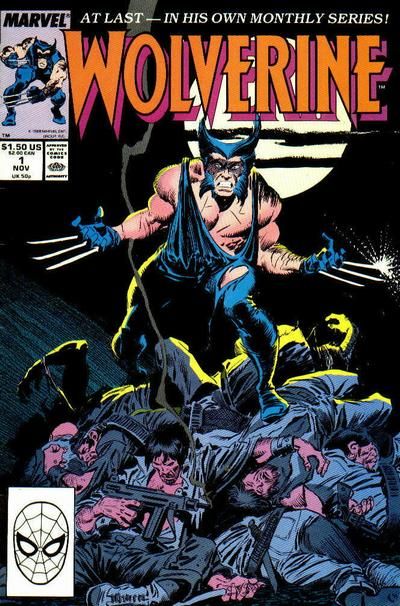 This is the first Wolverine on-going comic book series among other things. This is a huge book for Wolverine fans and has been one of my top picks consistently from the Copper Age.

Wolverine #1 (Ongoing series) has lost about 13% of its value over the last 60 days averaged over 31 sales.  Most of the upper grades have seen a hit, only grade 8.5 has seen an increase in value of +36%.  Basically, the book is being bought up by those who don’t own it and sold by folks who have made money on Wolverine #1 (Ongoing series) in their existing collections.

This is a solid book and will retain most of its present value. How far it will fall is probably until the next Wolverine actor is chosen. Notice I did not say next movie, this character is so beloved that; whoever replaces Hugh Jackman will have instant stardom and will send this book into a spec frenzy.

Aliens #1 sold for $334 on 7/30/21. This represents a 30% drop from two weeks earlier. What caused this precipitous decline? Unknown. This book as an independent comic book has had a solid run-up.

My humble suggestion might be to sell at this point and buy back in at a lower price point.  It should also be noted that the mid-grades actually went up in value roughly the same amount. Don’t worry I don’t think it is “game over” for this franchise or even this comic. It is only a matter of time before another movie or TV show appears on the scene for this genre.

I believe both of these books are fairly valued in the GoCollect.com sense of it. Meaning that both are running at roughly FMV which has posted a solid run for any would-be investor or speculator.  On a side note, it might be interesting and fun is to see a mashup of these two genres on the large screen.

It could be done under an X-Men movie given the X-Men have faced “The Brood” in X-Men #155 (The Brood is an Alien-like species that tangles with the X-Men). Yep, who would win Wolvie and his healing factor and adamantium blades or the Aliens with acid for blood? That said, both books are still big Copper Age keys and both have strong futures at some point.  Now is probably a good time to invest in Wolverine #1 due to this decline.

These are Copper Age keys that have ongoing franchises and will probably spin up into movies or TV series, or both over the next five years. Buy these Copper Age keys prior to the adoption of the term “Copper Age.” It is more than likely that the creation of this era could increase the value of these books. In retrospect, both of these comic books were nowhere five years ago and were dirt cheap, not anymore.

The Eras of Concert Posters

GoCollect sits down with Adam Scherr, FKA the...

Why are Concert Posters Well-Positioned to be a...

I see what you’re basing the Aliens #1 value on. GoCollect says there was a $3,100 sale on Ebay in June but there’s no record of that sale happening on Ebay’s completed sales or TeraPeak so I don’t think that information is correct.