Checking Up on Ultimate Fallout #4 Values

Is the first appearance of Miles Morales a worthy investment? Let’s investigate further; how Ultimate Fallout #4 values have gained or lost in 2022? Further, what can we expect in the way of a movie or a sequel this year or the next? Ultimate Fallout #4 is the first appearance of Miles Morales. Thin, young, and representative of an entirely new generation. Miles is arguably one of the best of the replacement wannabees for Spider-Man. His origin story works, and the last movie was a very hip animation. It branched out to all the different versions of Spidey as a supporting cast for Morales.

The bottom line is that Miles Morales has done a remarkable job expanding the Spider-Man Universe. Notice, I didn’t write Marvel Universe. Sony owns this property and is playing it correctly working side by side with Marvel and its owner, Disney. Though unlikely, it is always possible the Spiderverse will outlast Marvel’s Disney domination. 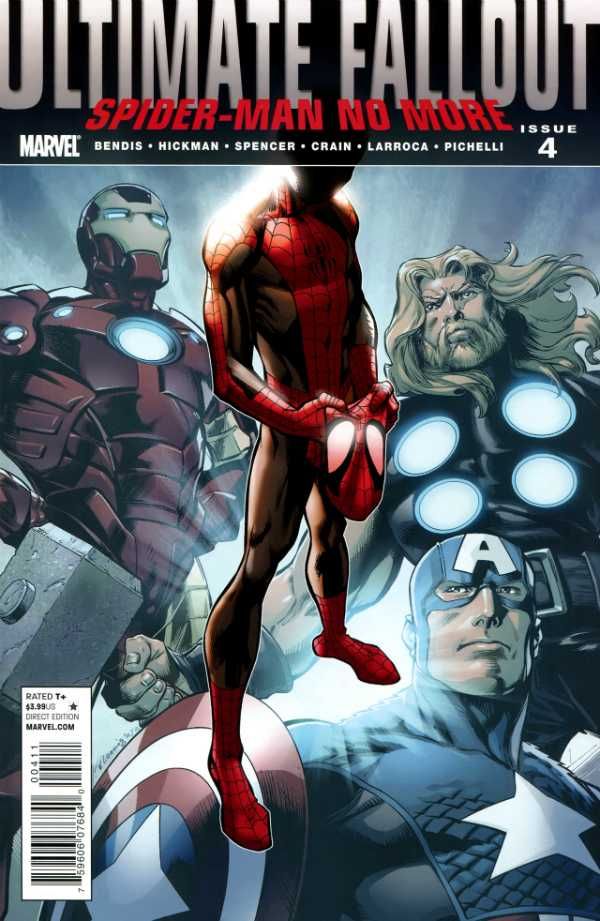 “As the Ultimate Universe mourns the loss of Peter Parker, a new Spider-Man for the modern era makes his debut – and he’s destined to be a star!

The supercriminal calling himself the Kangaroo is causing trouble in New York City, safe in the knowledge that Spidey is dead – when a young web-slinger wearing a familiar suit swings in to make the neighborhood his own! But who exactly is under that famous mask? Prepare to get your first glimpse of Miles Morales,” -MyComSp

This comic was written by Brian Michael Bendis and the cover art was Mark Bagley. These two make the perfect creative team for reinventing the ultimate hero.

Say what you will, there is no doubt that Miles “plays” with the younger generation. Furthermore, he seems to fit perfectly. I wonder if this team knew they were creating the next Peter Parker for the 21st Century when they brought Miles to life?

Anyone that has owned Ultimate Fallout #4 has made +100% on that initial investment, or more, in one year! This 2011 Modern Age comic has definitely found a following in the Modern Age. At this point, I think selling this comic book is a huge mistake. After all, there are hundreds of thousands of Modern Age books. But few garner this kind of support across the board. Just about every collector knows this book will rise in value. This is exactly why you want to hold onto it.

I am not sure about all the different Spideys, but I know this one has caught on with the average fan.  This makes Miles Morales the heir apparent for the throne of Marvel Headliner.

Looking out several years, say, a decade from now, many people will know this character as Spider-Man. Peter Parker will not be forgotten, but venerated as the character who laid this groundwork for the new generation to enjoy Spidey.

If you are having trouble with this change, you are not alone. However, you simply need to look back on the history of comic books to date. In the 1940s it was Shazam that was popular, not Superman. At least, not as much as now.

Then, the superhero of the ’40s changed from God-like and transitioned to more human being-type heroes with powers. The humanity, not the “righteousness,” of the hero was the selling point.

The character and nature of superheroes even changed to represent a more positive and modern view of heroes – and that just takes us to the 60s. In the 70s, we had plenty of diverse superheroes, horror, and more variety than ever before. Also, heroes weren’t infallible; they made mistakes. They even died of cancer. Worse yet, they started to kill…

I am glad there are new heroes that appeal to this generation. I believe the more the merrier and would rather have the next generation believe in heroes and try to do the right thing. That ethos has been nurtured in popular culture to a positive degree.

Besides, if younger generations make these comics their own then they might just be keeping comic books alive as collectibles and investments. This means, unlike the washout in Western comics in the 70s to 90s, we might be able to sustain interest and collectibility, well into this century.

Is it possible Ultimate Fallout #4 could become as valuable as Silver Age Spidey keys? My speculation-sense is certainly tingling; how about yours?

I agree 10 years is a good guess regarding value and mass demand for the book. The 1in25 1st print will by then will be a ghost with any high NM examples gobbled up in collections and will stay there, I dont agree that Peter Parker will just be a name held in great esteem only. If the companies have any sense they will keep developing Peter as well perhaps as an older version permanently in case Miles falls through. At this stage i dont see that happening and the standard 1st print could also become a blue chip very expensive book. The 2nd prints will pale in comparison despite chancers pushing prices,The chances are by then Amazing Fantasy 15 will have cult mythos value possibly on par with Batman’s 1st appearance.

Gotta disagree with just about everything you’ve stated here.

Out of all my investments Fallout 4 was probably one of my wisest. I awoke from my comic book buying hibernation when this book was going for $200 avg. at 9.8 and snapped up a few of them. Then I bought two of the variant covers both 9.6 for $550 avg!!!! I plan on holding forever.
I also recognized that Gwen Stacey as spidey would be awesome and as it turns out another great pick, I almost dropped when my $850 bid for the Land variant won on EBAY!! Never spent that much before… But really glad I did. Then was able to get the main book for just under $200
They are all the crown jewels in my comic collection box/es
Thanks a lot for the article

O Yeah, 1 more thing, I’ve noticed the constant negative spin they seem to place on peter parker. In order for his foes to win he has to be somehow degraded, whether it is by injury or his attitude. They make him blind to obvious answers to issues and give him faulty reasoning.
and there is no doubt that Peter is smart enough to create his own tech. Instead they gave that distinction to Tony Stark, but the suit would have meant more if Peter was allowed to create it. I mean, stark’s spidey suit had a nanny attached!!?? Like what?? No respect for Peter Parker as a super hero at all. I don’t care if he is still a teenager at the time.
So my little rant is over,
I do have a fix… Grow Peter up and slack off on the self loathing bs
thanks

just thinking on your article again, there are keys, then there are keys… FO4 is, I believe, a super important key… just like the original spider-man changed everything in the comic book world, this one will be seen as the key that ushered in a whole new era