What do G.I. Joe, the Red She-Devil, and Punisher have in common? Unfortunately for all these characters, their comic book appearances have suffered in the Bronze Age.  For apparently no rhyme or reason, these three have fallen out of the Top 100 Bronze Age comic books.

Can we follow the tracer rounds back to the point of origin? Why have these books fallen from the Top 100 Bronze Era? Furthermore, have any retained their return trends in positive territory? Finally, which are keepers, which are stinkers, and which should you load up the truck with?

Anyone that has read Conan the Barbarian knows there are two main women in the franchise. One is the beauty, Belit. The other is the sexy Red Sonja. She first appeared in a cameo in Conan the Barbarian #23. Before we get into the controversy over this issue, let’s do our “due diligence” and review the creators.

Red Sonja was created by the writing of Roy Thomas. Gil Kane and Barry Windsor-Smith were on the art. It was 1973, nearly the beginning of the Bronze Era. She was loosely based on an early magazine character by Robert E. Howard but has since become Marvel’s creation, pure and simple.  She is the ultimate redhead.

Currently, Conan the Barbarian#23 has fallen 20 ranks to end at rank #104/ Though Sonja’s first appearance has declined in price  “tis-but-a flesh wound” (Monty Python) and this book is a great investment in the future.

G.I. Joe #1 was printed on Baxter paper and based on the Hasbro toy line. The comic book was created in 1982 by Larry Hama with the pencils of Herb Trimpe and Don Perlin. This book had been long forgotten until two years ago when it began to explode like a mortar round.  Now, it has unfortunately cooled quite a bit and been demoted 60 ranks back to private at rank #127!! Yep, Snake Eyes and the whole crew have their fingernails dug in just a dozen ranks from falling from the Top 200.

An entire article could be done on G.I. Joe, A Real American Hero #1, but all you really need to know is the toy line has been with us going back to 1964. It is one of the most collectible toy franchises I have ever personally sold. Any G.I. Joe toy, even parts like a tank turret retain value and can be sold online.  This alone is enough reason to buy and hold this comic book. 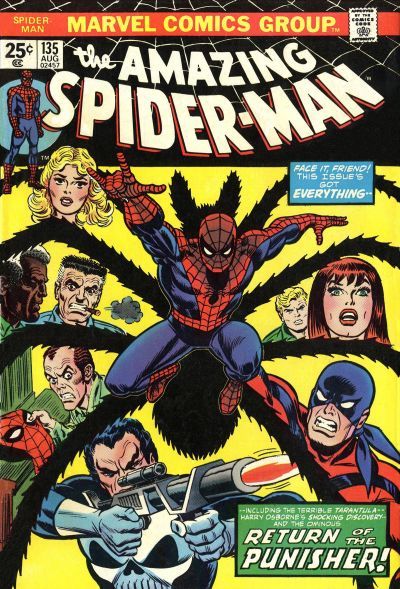 Amazing Spider-Man #135 is the second appearance of the ultimate badass of Marvel Comics: The Punisher. Created in the 70s during a crime wave, he is the Dirty Harry of Marvel.  Punisher is gritty, righteous, and brutal; the end result is that the fans love him.

It doesn’t hurt that Jon Bernthal gave us his all to play the character on Netflix. Be that as it may, this book has fallen 106 ranks to end at a ranking of #178. Why? Is now the time to bug out of Punisher keys?

Of the three comics having been purged from the Top 100 Bronze Age comics, only G.I. Joe, A Real American Hero #1 is the real McCoy.  Despite this drastic drop in the rankings, this comic has the strongest franchise of the three and a movie about Snake Eyes has been scheduled. Having a catalyst like a movie premiere is a great reason to speculate on this book.

In my humble opinion, this comic has lots of room to run and will return to higher trend returns like the positive +18% it has had over the last year. Currently, the last sale for grade 9.8 in April was $2182, G.I., which is an entirely new take on military spending. In addition, don’t forget there is a new movie in the works. The toyline is strong as a collectible, this is a speculator’s buying opportunity.

For the investors among us, Conan the Barbarian #23 is ripe for picking off. It has fallen as much as negative -25%.  Last month they just chose the lead for a Red Sonja movie.

Things are progressing for this franchise as well. Truly Red Sonja has been around for quite a while and has yet to really inflate in value like much of the other Bronze Age keys. Add to that the controversy of cameo vs. first full appearance.

In the final analysis, G.I. Joe and Red Sonja are both very similar opportunities to buy as either speculation or investment. At the end of the day, they both end up having one thing in common, opportunity.

Enter the HOUSE OF SLAUGHTER this October

Is the Marvel Spec Market Dying?

Oddball of the Week: Concrete

Hottest Comics: Hail to the Toddfather