Welcome back to the Blogger Dome! Here, bloggers will argue different topics involving the comic book market and industry.  This will be a combination of the Big Bang Theory meets the WWE.  Smack talk mixed with comic book debates.  Bloggers going at each other to amuse and educate our readers.  And we want to hear what YOU have to say about it. Today’s topic is Fantastic Four #48 vs Fantastic Four #49. So tune in, get comfy, and let’s go!

Ding ding! Allow me to present your newest fighters in the Blogger Dome ring… NORMAN AND RYAN! Fight!

NORMAN: The Silver Surfer is the ultimate superhero. He ranks right up there with Captain America on the self-sacrifice scale and could give Superman a run for his money in the power department.  This pure hero, our superhero, the Surfer has sacrificed everything, even love, to save Earth. A person is judged by his enemies, the Surfer’s enemy is Mephisto. “Nuff Said!” We know that Silver Surfer is the highest quality superhero, but what about his comic book keys? Which should you own, Fantastic Four #48 or Fantastic Four #49? In this Blogger Dome, I will argue that the first full appearance is usually the best bet.

RYAN: In the words of incomparable Bruce Banner in Avengers: Age of Ultron, “This can’t be happening again! I’m in a time loop!”

How many times are we going to fight this first appearance battle? If we compare these two books side by side, they fit the very definition of “cameo appearance” and “full appearance” for Galactus.

The Silver Surfer first appeared in Fantastic Four #48 along with his “Master” Galactus. This book was written in 1966 by Stan Lee with Jack Kirby as the artist and Joe Sinnott on ink. This is literally the first full appearance of Silver Surfer. In addition, it is a cameo of Galactus. Therefore, this qualifies as a multi-key, which is always a solid purchase.

In addition, the cover tells the entire story of this book. It has all of Earth watching in horror as some unknown force descends upon us. Despite the Gerber Baby on the front cover, this works to draw the audience in.  By comparison, Fantastic Four #49 simply has a disembodied head of Galactus attacking.  Yes, he is missing a body!

On the last page of Fantastic Four #48, we have a one-panel glimpse of Galactus. Nevermind the fact that he looks completely different by the next issue and only says 18 words in his cameo appearance.

This is simply not a Galactus book. It is a Silver Surfer book.

Yes, Silver Surfer by himself makes this this a blue-chip Silver Age key, but let’s be real. Silver Surfer may ride the skyways, but in the grand scheme of Marvel lore, he doesn’t hold a candle to the power and influence of Galactus. Silver Surfer is the major attraction of this book, unless you like looking at the Gerber Baby on the cover, but they don’t even list him on the cover. The draw here is Galactus, but you have to wait until the last panel to even catch a glimpse.

For Wolverine, the market has decided that Hulk #181 is the more valuable book. Why? It’s his first full appearance. Wolverine is on the cover – and get out of here with the “Galactus is written on the cover of #48!” take. Words on the cover don’t count. And Wolvie is actually part of the story in Hulk #181. Same with Galactus in #49.

These are all identical representations of the FF#48 and #49 story. If you’re looking for the first Silver Surfer, #48 is your book. But Galactus is the draw here, and his first real appearance is in FF #49. 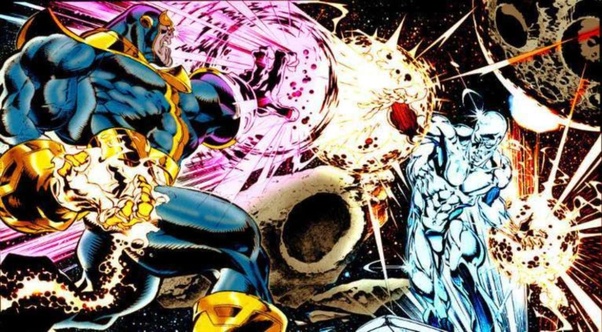 There is something to be said for owning the first full appearance of a character. Fantastic Four #48 is such a book; the first appearance of the Surfer commands impressive returns. The Power Cosmic is certainly on the side of this comic book. It has returned a positive +195.6% over the long-term for grade 9.6 (Modeling at maximum trend analysis).

Let’s say I want to invest long-term in one of these books, and only one. I know the information about this being

the first full appearance of Galactus – even CGC and CBCS denote that on their slabs. I know this is the first cover of both Silver Surfer and Galactus. That is indisputable. So what about their prices?

Should this become a “what’s best for my bank account” exercise, #49 is going to win every day of the week. Honestly, this Blogger Dome could end right here.

When you are the best, you don’t have to prove it. Oftentimes, the results speak for themselves. Such is the case for Fantastic Four #48 with the highest return of the two books at a profitable return trend of positive +98.5% for grade 1.0 (fair).

That return trend investment is unmatched by its weak second appearance counterpart as FF #49 in grade 1.0 (fair) has only a measly positive +4.8% return trend. In addition, FF #48 has impressive return trends, see below:

When I’m dealing with luxury goods – as both of these books clearly are – one factor that influences my decision is how proliferated that item is. Does everyone have it? Is this a rare item? Remember Coach purses? LOL, Coach purses. It got to the point where so many people had one that you couldn’t walk into a department store without seeing a Coach sale.

One would think the lower-priced issue here would be more widely available and therefore more would have been submitted for grading. Well, check the census my friends. Fantastic Four #49 has only about 54% of the available copies of FF #48 (roughly 3,400 versus 6,300) in a blue or yellow label in the CGC database.

Maybe there is a large cache of raw FF #49 out there somewhere, but do we count on that? Should the market ever catch up with the fact that this book is the first full appearance of Galactus, his first cover, and the first Silver Surfer cover, the relative scarcity of this slabbed book is going to drive the price into the stratosphere.

These results are superhero-sized returns to be sure for both books. But in this cage match, Fantastic Four #48 is the clear victor.

Ryan: That Don’t Impress Me Much

Or something like that. Look, if you are a fan of oversized and baby-faced villains on your comic book covers, then I guess Fantastic Four #48 is for you. If you are a die-hard Silver Surfer fan, this is a book you have to own. He’s not on the

cover. He’s not referenced on the cover. Apparently Stan Lee, Jack Kirby and company thought so little of Silver Surfer that they chose to highlight someone on the cover who appears on one half of one page over a new hero like Surfer.

Norman: Fantastic Four #48 has better return trends, a solid cover, and you can double your money in under a year for certain grades.  Unlike FF #49, which in grade 0.5 would take about 100 years to double in price! At that point, you should be able to see Spider-Man

2099 in the theaters. In this Blogger Dome, Fantastic Four #48 has broken the back of FF #49 much like Bane with the Bat. Do you guys have ideas for a future Blogger Dome? Let us know in the comments!

Ryan: Truthfully, if I am a fan of the Fantastic Four, Silver Surfer, and Galactus, which one of these do I want hanging on my wall or displayed in my comic room? It’s really no contest. Fantastic Four #48 serves as an introduction to the Doomsday story referenced in Fanstastic Four #49. I truly believe when the Marvel brass were planning out these issues months in advance, they wanted #49 to be the standout, the one that knocked people’s socks off.

It still does today and it is clearly the one that deserves your investment.

Who do YOU think won this week’s Blogger Dome? Let us know in the comments or hit up Instagram to vote!

Besides being a proud husband and dad, I work in higher ed, write about fantasy sports, and collect Silver Age and Bronze Age Marvel comic books. Daredevil is the best superhero there ever was and you can’t convince me otherwise. You can follow my collecting journey on my Instagram account @kirkseycomics. For more of Ryan’s blogs, check him out here!

Have you checked out GoCollect’s YouTube channel yet? Don’t miss out!

Great fun article. The Chicken (FF48) or the Egg (FF49). Returns measured today show the chicken can feed an entire family while an egg can only feed one. But if we look to the future the Egg will grow into a chicken and maybe even be bigger than its Parent…Maybe. I’m really hungry NOW so I’m with Norman and throwing in with FF48. Yum, I Luv that Chicken!
🙂

Good fight guys ! Remember past performance is no guarantee of future performance – FF49 has more scope for increasing in value, especially given it’s much lower number of graded copies and it’s lower price across the grades.