One comic book “Bat-O-Ranging” up the charts and almost in the Top 100 Silver Age comics is Batman #139.  This represents the largest leap up the ranking of any comic book into the Top 200 Silver Age books recently. Why has this comic book sparked such interest and what returns can we expect?

Batman #139 was published by DC Comics on April 10, 1961. This script was cut by Bill Finger, Henry Boltinoff, and Jack Schiff. In addition, both Sheldon and Henry created the pencils and inks, as well as a host of other artists.

Reminder: this is not Bat-Woman. It is Bat-Girl. 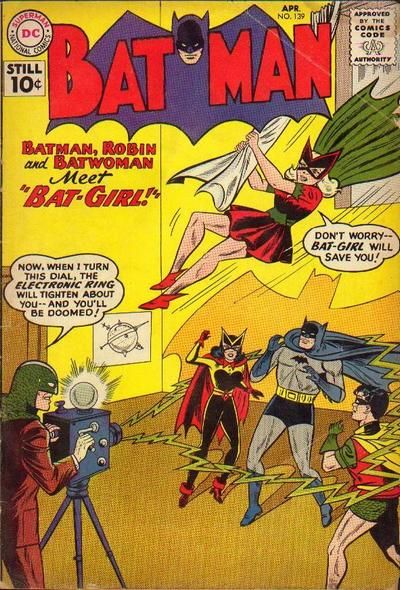 This is really where speculators and investors need to be focused if they’re going to deal with recent upticks or flip a book over six months. By monitoring what is in the SA Top 200 and about to go into the SA Top 100 you’re going to be there right before it gets an inflated value from hype. Avoid having to pay substantially more to make significantly less.

The trick of speculation and investment comics is truly early adoption in purchasing. This, in my opinion, is the epitome of how you should purchase most of your books in the speculation/investments realm.

This early Silver Age comic book Batman #139 is going to continue to drive pricing ever higher. I believe in getting ahead of the game. You can be one of these early adopters and expand profit substantially. Also, if as an investor you’re not sure whether you want to hold a book or sell a book, this gives you the option to take a little risk. Put simply. you have room to make mistakes. Perhaps the value will increase after the movie or perhaps not.

By taking a position on a comic book early on, even a couple of months out, you avoid the risky endeavor by putting less money down early on. The hype that follows after the final trailer or weeks before a premiere is similar to ticker symbol popularity on Wall Street. One day, Facebook is up. The next, people are buying Proctor and Gamble. Whatever is hot will often run up in both comics and stocks. Yet, that is another reason why you want to have early adoption. Your profit margins give you leeway to make mistakes and avoid paying inflated prices for books.

Why is Batman #139 the popular flavor for this month? Put simply, the new movie coming out on March 4, 2022. This new version of  “The Batman” (How original hmm?) stars Robert Pattinson. You know him as the sparkly vampire from Twilight movies. Yes, he is that kid! It is either going to be a flop or it’s going to be a classic retelling of the Batman saga. Don’t get me wrong; Pattinson is a great actor but just the wrong fit with Bats. If it rocks, then you can count on huge returns going forward. However, if it is zany, campy, and unbelievable, then you can count on a decrease in the price of this comic after the movie.

They are going to miss the bar on this one. Because, quite simply, Chris Nolan created the three best Batman movies ever made. That is too recent a phenomenon to let go of in the public’s mind.

The comparison will kill any chances of  good reviews, to quote a movie title, “There will be Blood.” After all, it’s about time for another bad Batman movie.

The movie hype notwithstanding, Batman #139 is a solid key to own.  It is still relatively cheap in the lower grades, which means it has room to run up.  The grade 2.5 will cost you around $235 for ownership of this older Silver Age classic. Collectors should be looking to grab these DC keys while they are still reachable.

Investors, well, we are six months out or so from this movie premiere. Buying now seems like a solid purchase. To the speculators, if you can get a raw copy you might be able to flip it as a potential CGC slab even at low grades. Folks, make sure your Bat-Cape glider is still functioning just in case you have to cut the Bat-Grapple on this comic!

Do you have Batman #139 in your collection? Let us know in the comments!

Have you upgraded to GoCollect PRO yet? Exciting things are right around the corner!

i fear you could be right in your assessment on Pattison. I so hope you are wrong. We dont constantly need new batmen every other movie. Personally i didnt rate the Nolan trilogy as outstanding, yes it was good and watchable but i always felt that Batman was miscast. I loved Afflecks Bats, grisled and older and so wanted the Knightmare Batman trilogy. Still we wait and see. Afterall most movies look awesome on the big screen…Guardians Galaxy 1 on an imax 3d was stunning….

So why are people speculating on issue #139? Is Betty Kane in this movie?