WildC.A.T.S. stands for Wild Covert Action Teams, much like the special operations teams of the SAS, SEALS, and Delta Force. However, WildC.A.T.S. has a superpowered twist. The original series ran a successful 50 issues. The variants of this issue have some value, like the gold edition. Can WildC.A.T.S. #1 (gold edition) be profitable with so many A-cover copies in print? Is there a catalyst we can hope for? This WildC.A.T.S. #1 title was popular when it first appeared in print and ran over a million copies! It makes sense, as this work had some talented names attached over time. Initially, Jim Lee brought the magic, and then the likes of Travis Charest, Chris Claremont, James Robinson, and Alan Moore contributed to this franchise.

The Wildcats are a special ops team with a superpowered crew. However, they seem to have that heroic “heart of gold” that makes superheroes teams likable and fun. Published by Image back in the distant 90s, it represents probably one of the best independent teams put together outside of Marvel or DC Comics.

“The Wildcats launched at the apex of a speculator-fueled comics sales boom and was wildly popular at its inception, with wholesale sales to comic book stores above one million copies for early issues. This first series ran for 50 issues, and in addition to Lee, featured work by comics creators such as Travis Charest, Chris Claremont, James Robinson, and Alan Moore.” (Source: Wiki)

This comic was the first Image Comic to blast off with Jim Lee at the helm as both writer and artist. Its original direct version has two bound-in-trading cards, the newsstand version does not. It was published in 1992 and currently has an FMV (fair market value) of around $110. This is really not bad, considering this book has sold over 1 million copies! I think from a collectible and investment standpoint this book has a small amount of room to run. I could see a movie on  WildC.A.T.S. #1 pushing this price into the $300 range.

This book was produced at the same time as the A-copy above but with an embossed cover and trading cards included. Kind of an interesting-looking cover as it really stands out especially in gold. It is usually referred to as the “Gold Foil Variant” and has commanded a price over $800, but recently has plummeted to $144 back in August 2021.

Interesting side note, these heroes got to meet the Alien creature in a head-to-head matchup. Let’s just put it this way, “Game over dude!” It did not go well for the Wild C.A.T.S. but made for an interesting read and an exciting blending of two genres, check it out! 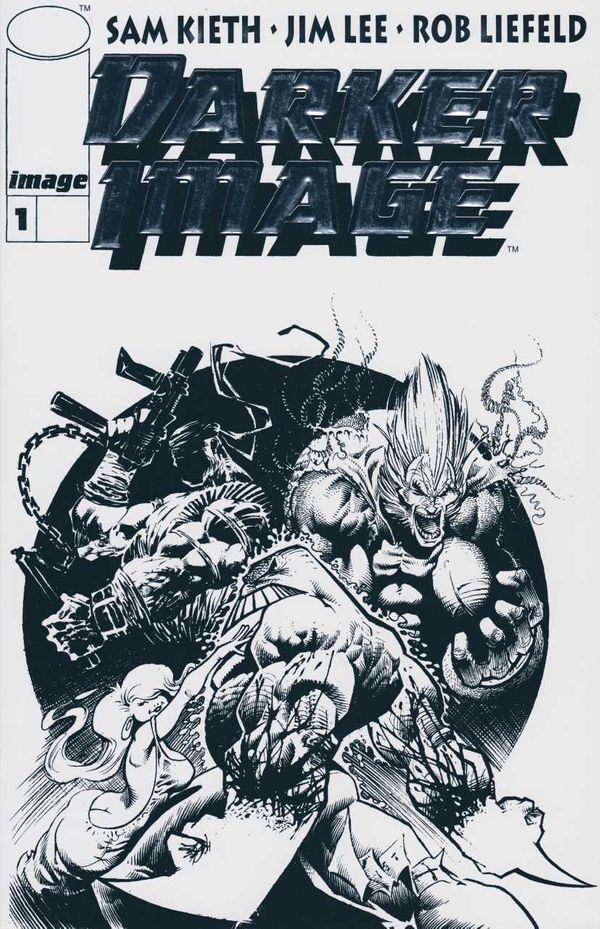 “Darker Image was an American comic book published by Image Comics. The series was intended as 4-issue miniseries, serving as an introduction to three “grim and gritty” characters. The series, however only had one published issue, published in March 1993 and  Jim Lee created one of these characters.

A gold logo incentive variant as well as the ‘platinum’ (black and white with silver foil logo) version of this issue exists. Each issue when new was polybagged with one of three trading cards, The Maxx, Bloodwulf and Deathblow.

In 18th October 2021, a group of fans created a fanzine called “Darkest Image,” a 200-page anthology series that feature several characters from the Image universe of the 1990s. All profits from the sale are donated to the comic book legal fund” (Source: Wiki).

The platinum version of this comic book has reached $260 for a 9.8-grade comic book. In November, that same book sold for $155 on eBay. The bottom line is this comic is all over the map and not easy to accurately price. That said, Image and Valiant created a fan experience with three new characters that have managed to survive in popularity into the next century. The A-cover is much cheaper running at about a one-year average of $89 a book in 9.8 grade.

The excel spreadsheet above has some startling returns. But it has been a monumental 3 years for comic books across the board from all genres. I like Darker Image #1 (Platinum) mainly because it has only 252 in CGC Census and has room to run up even higher.

Though compared to WildC.A.T.S., it doesn’t have the same possibility for a movie catalyst. The Darker Image #1 (Platinum) is probably harder to get and with a low amount in CGC this book has room to run-up.

On the other hand, WildC.A.T.S. #1 Gold Edition has very popular characters and an organic growth rate that makes sense to my greedy eyes. Whichever you invest in will probably continue to advance in price.

After all, as mentioned at the beginning of this analysis, Jim Lee was involved in the creation of both books. His reputation has only grown over time and could easily fuel a movie catalyst for Wild Cats, so pick your poison, people!

There was also a variant of the gold Wildcats cover with Jim Lee’s hand-signed signature in silver marker. I don’t know the distribution on these, perhaps one per store, but they pulled a nice chunk of change back in the early ‘90s.