Avengers #83: The Beginning of Bronze Age & the Creation of Valkyrie

If you’re interested in investing or speculating in Valkyrie’s books, where to start? Look no further than the returns for Avengers #83. Are they good, bad, or ugly? Finally, can this late Avengers publishing have a future value much like their early predecessors?

For comic book investors, the Bronze Age is one of the most overlooked comic book ages in which to invest. This era lasted from 1970-1984 and was characterized by an increase in adult content (such as violence), a decrease in distribution, and a dramatic rise in value for certain issues that are now worth thousands of dollars each.

The lesser-known issues, such as Avengers #83, contain one of the first appearances of Valkyrie. Valkyrie were female spirits sent by Odin to pluck that rarest of treasures; the heroic fallen heroes from the field of battle in Norse myth.  Marvel created their own version, giving one Valkyrie a superhero identity. She would go on to be featured heavily throughout the Thor movies of Marvel’s film franchise.

The Bronze Age of comics was an exciting time for fans. During that time, the women’s movement was really taking hold in America. Hence, the creation of an all-woman team called the Liberators in Avengers #83.

You know that feeling when you find a random comic book in the back of somewhere and it’s so cool? That moment where your mind is blown by something they created decades ago?

Avengers #83 was one such occasion for me, as this issue features my favorite team from childhood- The Liberators! I’m not sure if there are any other collectors out there who haven’t seen these warriors come alive before, but let me tell ya…they were pretty awesome!! In fact, their first appearance had quite an impact on yours truly right away with just how different each member looked compared to what we’re used to seeing nowadays (a rack being passed around).

Note: This is not actually the Valkyrie but instead the Enchantress despite that it is the concept and first appearance. 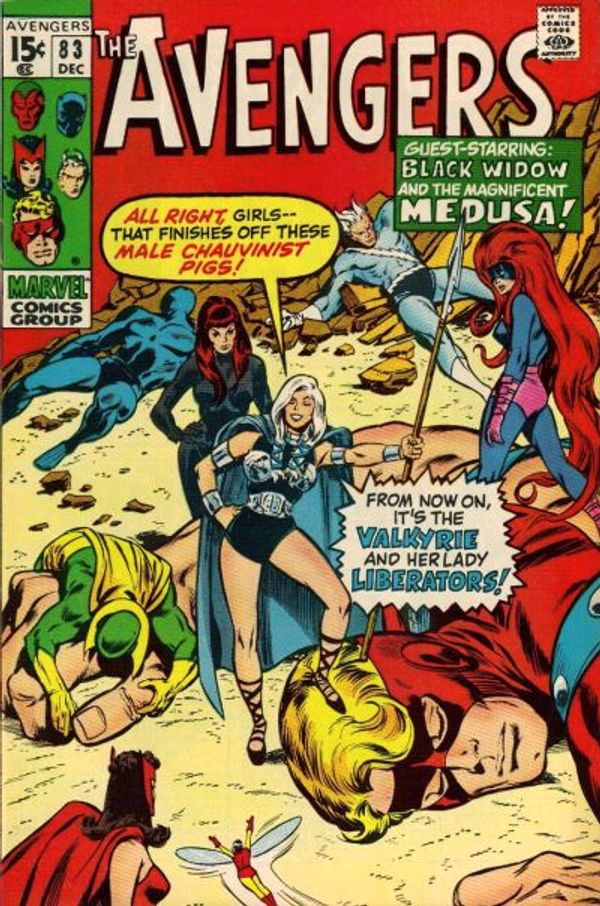 This comic was written by Roy Thomas and had contributions from one of my favorite Conan artists John Buscema. In 1970 they created The Liberators which had Valkyrie, Wasp, Scarlet Witch, Black Widow, and, hilariously enough, Medusa.

This was the first all-pro-woman team in Marvel and a fun read with a great cover. It should be noted that though this is the first appearance of Valkyrie, it is really Enchantress in disguise.  In the comic book market, a grade 9.8 recently sold for $3000.  Something to be noted is that this book has only 794 grades attached to the CGC Census, which is very few. This leads to the conclusion that obtaining this book now, is a good idea as prices are likely to rise for this rare comic book. 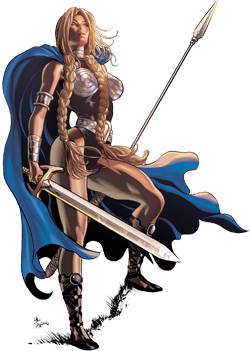 This comic book is a rarity that shows the changing times for women in society. The Avengers team, made up of mostly male members, are baffled by this new development and unsure how to handle it. It’s funny to see these masculine characters react with surprise when they first encounter early versions of the Wasp, Scarlet Witch, She-Hulk, and other female superheroes who joined their ranks in the 1970s.

Do you want an investment-grade Bronze Age comic book (i.e., one worth more than $20)? Then pick up Avengers #83. Get in on the Bronze Age books while they are still available. Given the pace of comic book pricing today, that might not always be the case.

After all, most of the print runs of the 70s were small by today’s standards creating an organic rarity. That kind of genuine rarity is hard to match in the Modern Age; will you be the one to leave this Valkyrie on the field of battle?

Thunderbolts Spec: Bark at the Moon(stone)

EGS Comic Grading: An Alternative Worth Checking Out

Should you Invest in Spectacular Spider-Man #90 over...

Oddball of the Week: Bessie the Hellcow

Coldest Comics 6/23: Thanks, Multiverse of Madness.

Breakfast… The Most Collectible Meal of the Day