Concert Poster Gems from Heritage’s January 28 – 29 Entertainment Showcase Auction
Different Ways to Sell Comic Books & Collectibles Pt 3: Mid-Range Auction...
Hottest Comics: Cable’s First Appearance Edges Out Hulk #181 and FF #48
Weekly Silver, Copper, & Bronze Age Spec: Ghost Rider
Skybound is Opening Up For Investors – Would You Invest With Them?
The Comics That Every ’80s Kid Had to Have
Action Comics #1 “Rocket Copy” Sells for Record $3.5 million
Oddball of the Week: Lady Deadpool
Has Uncanny X-Men #120 Overcorrected?
The Sports Cards That Every 80’s Kid Had to Have
Comics 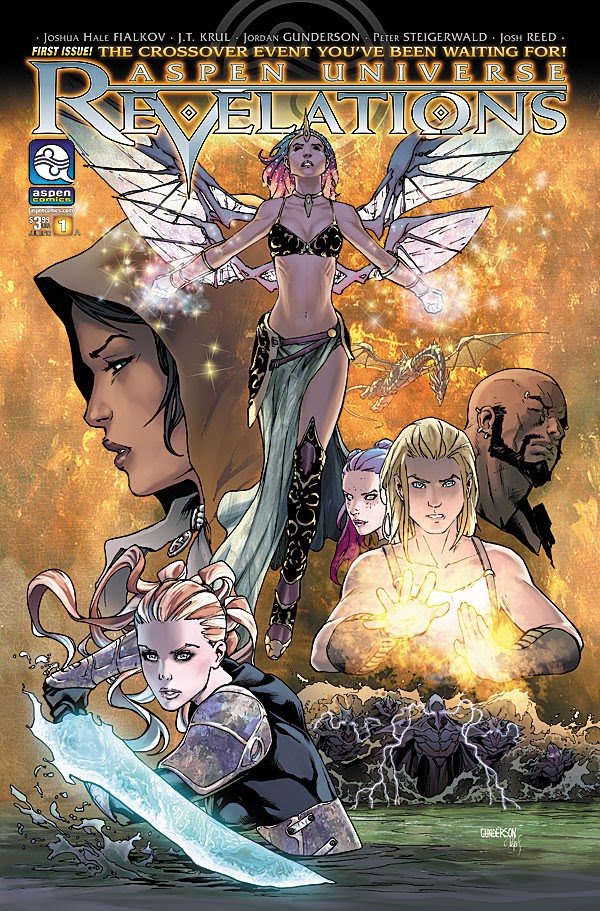 The kind folks at Aspen Comics have supplied ComicList with their solicitations for comics and other products featured in the May 2016 Previews, scheduled to ship starting July 2016.

The most groundbreaking event in Aspen Comics’ history starts NOW!!!

For over thirteen years, devoted Aspen Comics fans have clamored for something special…something unique…something…UNIMAGINABLE! Aspen Comics has answered the call for loyal fans and new readers alike!

This summer, legendary creator Michael Turner’s two greatest creations, FATHOM and SOULFIRE, unite as one in a crossover event so massive in scope, it can only serve to forge a BRAND NEW ASPEN UNIVERSE in the process! With the existence of humanity, along with The Blue, facing a catastrophic turning point for their own survival, one woman of both worlds, Aspen Matthews, must embark on a quest spanning not only time but also magic unlike any she’s ever encountered–including a cast of characters familiar to all Aspen–and Soulfire–fans!

Your complete inside look into the NEW ASPEN UNIVERSE starts here!

Dive headfirst into this all new and expanded ASPEN UNIVERSE: SOURCEBOOK written by the writer of Michael Turner’s Fathom and Soulfire, and Executive Assistant: Iris Sourcebooks, Hannibal Tabu! Jam-packed from cover to cover with detailed character profiles, in-depth power charts, revealing story elements and so much more—including all new entries from hit Aspen titles such as Shrugged, Charismagic, Jirni and more! This is the definitive source and companion book to prepare for the all-new Aspen Universe!

Now fans can bring the amazing pencils of MICHAEL TURNER and FATHOM to life with this all-new Aspen Comics oversized coloring book featuring the legendary creator’s classic Michael Turner’s Fathom artwork along with many other Fathom artists from over the years! This must-have for any Aspen Comics fan allows everyone to participate in coloring the world of FATHOM however they see fit! A perfect addition to the new ASPEN UNIVERSE collection!

Fans of Michael Turner’s fantasy adventure series Soulfire can now create their own spark of magic with the first ever Soulfire Coloring Book Special #1! This oversized coloring book includes Turner’s epic Soulfire artwork, plus dozens of other popular Soulfire artists that helped spawn new generations of Aspen fans! Now, everyone can color Turner’s amazing pencil work themselves as they prepare for the dawn of the all new ASPEN UNIVERSE!

Following the devastating events of “Michael Turner’s Fathom: The Elite Saga,” Aspen Matthews finds herself at a significant crossroads in her life!

With the memories of her past no longer weighing her down, Aspen is finally able to set about building a new life in San Diego once more. However, being the daughter of two worlds—and living above the surface– is no easy feat! Aspen will quickly discover the winds of change oftentimes lead directly into a dangerous and bloody future!

Collecting together the All-New Fathom series presented during Aspen’s 10 year anniversary, and brought to you by fan-favorite writer David Wohl and artist Alex Konat, this beautiful collection is a must have for any Aspen or Fathom fan!

Dark times have fallen on our heroes as Grace, Malikai, Sonia, and PJ have all taken separate paths following the devastating battle at the end of Michael Turner’s Soulfire: Volume 2!

Grace finds herself attempting to hold together the kingdom of the Everlands, as a theft in the hallowed halls of Anantia threatens to weaken the bonds between the Rahtumi and Sethoru once more. While Grace struggles to keep unity between the two races, Malikai, after unleashing his frightening levels of power during the final battle, deserts the group as he searches within for answers. However, Rainier’s forces persist in their quest to exterminate the return of the light as one of his most trusted allies soon discovers a darker form of magic in the process… with deadly results!

New adversaries, exotic locations, and a fresh cast of exciting characters, including some from the Soulfire Universe’s long forgotten past, reign supreme in this thrilling third volume of Aspen’s flagship title!