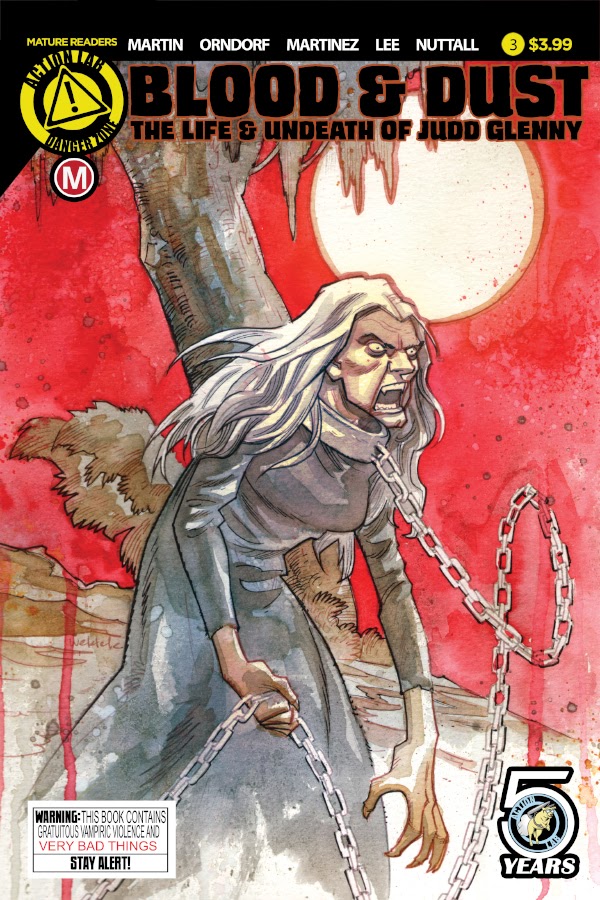 The kind folks at Action Lab Entertainment have supplied ComicList with their solicitations for comics and other products featured in the August 2016 Previews, scheduled to ship starting October 2016.

BLOOD AND DUST: THE LIFE AND UNDEATH OF JUDD GLENNY #3

Ruth Glenny has been chained up in the attic for years after the last killing spree she went on when free. But now with their Grandpa and brother trapped by the thing in the swamp, Zeke and Baby Hazel have no choice but to unleash their mother and hope that she’ll stay sane long enough to save their family.

Amid growing tensions among the colonists, the indigenous Maasym, and the colony security forces, an assassination attempt rocks the very fabric of Two-Sun Colony. The colonists struggle to find unity in the aftermath of the shocking attack.

Something stranger than usual haunts Full Moon Hollow, Paranormal Capital of the World. Adults either can’t see it, can’t remember it, or go crazy from it. So when a zombie outbreak threatens the town, only a group of misfit scouts can save it! Collects the fan-favorite miniseries. Be prepared. Be very prepared.

Howard’s ex-wife Sonia Greene steps up to the plate. In Vienna, the cult presents Adolf with an opportunity to finally make something of himself. Einstein goes head-to-head with Edison. Twain gets Tesla out of a hole. Houdini and Howard are invited to a very special wedding.

Hero Cats of the Apocalypse. The perfect treat for this Halloween season.

Chloe accuses Marinette of stealing her brand new gold bracelet! This marks the beginning of a series of events that will allow Hawk Moth to akumatize Roger, Sabrina’s policeman father! He turns into Rogercop, a super-villian who claims to embody the law by ensuring a tyrannical justice in Paris. Ladybug and Cat Noir will have to prove that they are the real upholders of the law and to prove Marinette innocent!

Every story has a beginning. Discover how Marinette and Adrien, two high school students practically like everyone else, became Ladybug and Cat Noir, and why Hawk Moth is their sworn enemy. This is the PERFECT jumping on point for new readers!

Based on the Animated Series by Zag Entertainment.

Monty has had a busy few months but this might be the craziest of them all. Join our lovable duo as they stand up to the school bully and an angry movie usher. Oh, did we mention Santa Claus? We didn’t?! Well, the jolly old dude shows up and he’s got that tricky list of his. Does this mean coal for Monty? Only one way to find out.

A sequel to the acclaimed Full Moon space western that introduced the world to “cowboys and aliens!” The backwater planet Oblivion has fallen on hard times, but everything’s about to get harder for Marshall Zack Stone with the arrival of Lyz Azorr, the daughter of notorious outlaw, RED EYE!

Halloween night, 1989. An unknown creature steps out of a long forgotten cave beneath the Bodega Bay Inn. While their master sleeps, the Puppets fight back to protect her from this mysterious intruder. Join us as the Puppets dive headfirst into another beloved subgenre: the creature feature!

Variant and variant sketch covers limited to 1,500 copies each.

After the confrontation at The Island of the Free Woman, Raven’s crew is worse for wear and one of their number is on the edge of death. But somewhere nearby is an island where a legendary woman can heal any ills. Can Raven and her crew get there in time and will this woman even help a crew of pirates?

THE FINALE! As Christmas Day dawns, Sleigher must use his newfound yuletide powers to stop a troll witch from devouring the souls of the world’s innocent children. Countless lives and (far more importantly) the glory of heavy metal itself, hang in the balance. Tune in to find out who’ll be crowned the new X-mas idol!

“Super Human Resources weaves the outsized antics of the super-powered and the travails of the ordinary with endless cleverness and invention.” – JAVIER GRILLO-MARXUACH (The Middleman)

Welcome back to the HR department of the world’s greatest super team. Tim from Finance soon discovers that Super Crises International has been infiltrated by sinister forces. And stupidity. Lots of stupidity. Collecting all four issues of the sequel to the sold-out, smash indie hit.

Now that Katie’s figured out she can control the appearance of the Vampblade costume, its time for an all new look inspired by one of her favorite comic books! She’s still got two blades and a thirst for TSD’s (translucent space d!@#s – aka space vampires), but now she’s rockin’ a crazy mercenary vibe too!!

Vampblade picks up right where she left off, embracing her new lifestyle of comic store owner by day and other-dimensional vampire slayer by night. But when you transform into a scantily clad 90s bad girl with giant blades and chains, keeping your anonymity is a challenge. Consequently, so is surviving the escalating arms race with hidden alien invaders!!

ZOE DARE VS THE DISASTEROID TPB

When the Earth itself is in danger from an alien threat, a professional stuntwomen is our only chance to save humanity! But is she up to the task? With the help of her punk rock, I.T. savvy sister and two A.I. enabled robots, the unlikely team begins the adventure of a lifetime!
Collects ZOE DARE VERSUS THE DISASTEROID 1-4.

Vindictive wardens, disgraced sandwich kings, and past enemies thought to be dead. Boy, Janey sure has her hands full in this action packed conclusion of Skanks, Shanks, and Shackles.

Zombie Tramp returns to celebrate the darkest holiday of the year, and she’s bringing a murderer’s row of friends and creators with her! It’s an all-new, double-sized Hallow’s Eve romp stuffed with twisted tales, murderous tricks, and tainted treats! Featuring the talents of Dan Mendoza, Jason Martin, Bill McKay, Brian Hess, and many more!