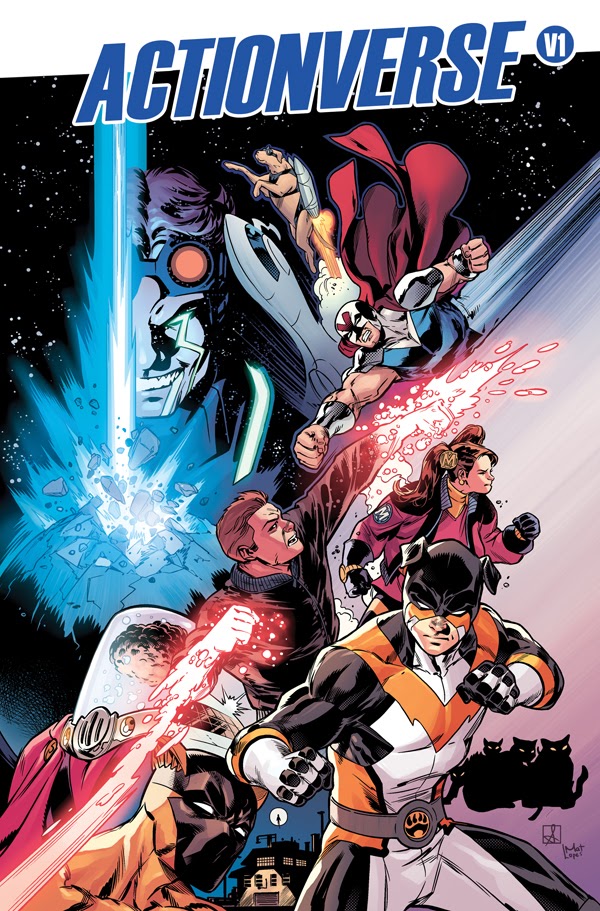 The kind folks at Action Lab Entertainment have supplied ComicList with their solicitations for comics and other products featured in the April 2016 Previews, scheduled to ship starting June 2016.

The event five years in the making! Only one force in the universe can bring Jake Roth (THE F1RST HERO), Molly Danger, Virtue (from FRACTURE), Midnight Tiger and Stray together. When the mysterious Cascade threatens the universe, Action Lab’s greatest heroes heed the call! But as the mystery of Cascade’s power deepens, only Molly’s arch-enemy, Medula, holds the answers–but in their darkest hour, will he be friend or foe? Collects Actionverse #0-6.

Torn apart in a brutal attack by his own townspeople in his own time, Frank awakens, his mangled body mysteriously pieced back together, in a strange dimension. There, he crosses paths with Casey–a scavenger with a penchant for trouble. Together the two must face merciless monsters and perilous roads as Frank tries to make his way home. Will he become a righteous hero or a spiteful villain?

Jake Roth returns home after the events of ACTIONVERSE just in time to face a new extrahuman threat that’s menacing the streets of Philadelphia. And as dangerous as an eight year old girl who can control minds might be… wait until you meet her mother! Meanwhile, the ETF is working night and day to neutralize the growing extrahuman threat. Could they be closing in on Jake?

Something stranger than usual haunts Full Moon Hollow, Paranormal Capital of the World. Adults either can’t see it, can’t remember it, or go crazy from it. So when zombies attack during the Hemlock County Scouting Jamboree, only a group of misfits can save the Hollow. Be prepared. Be very prepared.

The Hero Cats world tour continues! After crashing on a jungle island, Ace and his team meet Malo and his brother Keb. But something’s not right. The island spirits are affecting our heroes in dangerous ways. Will they be Jungle Cats forever?!

Welcome to the kingdom of Daravon, seat of the three deadliest traps in the known world. While Skirnir puts Zawa to test in order to retrieve a powerful weapon of legacy, Kai seeks to mend L’derOne. Along the way Kai comes to learn this safe-haven proves to be anything but.

The Itty Bitty Bunnies (Phil and Tyrone) make a deal with the Devil, awaken the magical Bong Genie, start a food fight that turns homicidal, and do lots and LOTS of drugs. It’s just another day in Rainbow Pixie Candy Land!

Adrienne is off to save her sisters with a new dwarven companion in tow. Meanwhile, Bedelia and Sparky have embarked on a very personal quest of their own, to reconnect with a past that both of them have long left behind. And on the other end of the kingdom, Devin and his new party try to track down the notorious Black Knight and find out what happened to the Queen.

The second deluxe Princeless hardcover takes Adrienne, Bedelia, and their dragon Sparky deep into the Grasslands to find Adrienne’s sister Angelica, the most beautiful princess in all of the land. Little does Adrienne know that Angelica has gained a small army of admirers and might not be so keen to leave. Meanwhile, the King has hired a group of deadly knights to track down and kill the knight he believes is responsible for Adrienne’s death, unaware that he’s putting out a hit on the daughter he already believes to be dead.

Collects the runaway hit sequel “Princeless: Get Over Yourself” and two Short Story One-Shots “Tales of Girls that Rock” and “Tales of the Family Ashe.”

Welcome to the Bodega Bay Inn!! Free Wifi! Free Premium channels! Free Continental breakfast! We should probably leave the killer Puppets out of the brochure, right? They’re trying to be better… trying. Strangers come and go in the hotel business, but there’s something really off about Samuel. Anyway, Rooms available! “VACANCY” starts now!

Variant and variant sketch covers limited to 1,500 copies each.

For nearly twenty years a life-sized puppet has tormented the children of the Bouldeston Institute for Mentally Troubled Tots and Teens. When her scare tactics escalate to murder, a young patient named Anthony seeks out the Puppets hoping they can stop their former Master’s rampage. Things, however, are never as simple as they seem.

Film and comics collide in THE WOODEN BOY as the Puppets go toe-to-toe with the human-sized doll, Camille! Collects issues 8-11 of the ongoing series!

SPOT ON ADVENTURE: READY FOR TAKEOFF!

Join the action adventurer SPOT as he emBARKS on the mission of a lifetime! Saddled with the brand new partner that he never wanted, Golly-G the robot that wants to be real, Spot is hired to rescue a princess from the clutches of the bad guys. All the while being tracked by the notorious bounty hunter, the MOE MOE BLASTER… an assorted allotment of various other bounty hunters… the Galactic Space police… a Space Ninja named Konuichi… as well as the biggest fish named Fluffy you’ve ever seen! Great fun for all ages!

“This is the comic you never knew you were waiting to read.”
– Comic Book Resources

The sequel to the sold-out, indie hit is finally here. Welcome back to the HR department of the world’s greatest super team. Super Crises International has been infiltrated by sinister forces. And by sinister forces, we mean stupidity. Lots of stupidity. Cover by Justin Bleep. Variant by Gabriel Hardman (Hulk, Agents of Atlas, Invisible Republic.)

With Jessica’s life on the line, Addison makes the dangerous decision to confront the corrupt Detective Tico and his partners. Shocking choices must be made and Addison’s pursuit of justice forces her to face a rather monstrous truth about her dedication to the cause.

Katie Carva continues to discover more about the Vampblades, but a girl’s gotta eat, so why not dine and slash?! Just when she thinks she’s figured out how to take on the invisible-but-deadly Glorkian face-feeders, they go and get all next level on her!

The hit series continues with an all new story arc. Features a regular and special variant by the series artist, as well as “artist” and “90s Monster” regular and risqué variant covers.

The final issue of the first VORACIOUS story arc! Nate gets interviewed by the local news about the success of his restaurant and Captain Jim discovers that time travel always has consequences…

ZOE DARE VERSUS THE DISASTEROID #1

When the Earth itself is in danger from an approaching asteroid, a professional stuntwoman is our only chance to save humanity! But is Zoe Dare up to the task? With the help of her punk rock, I.T. savvy sister and two A.I. enabled robots, ready-or-not the unlikely team is about to be thrust into an adventure of disastrous proportions!

This is it! Now that Janey has merged souls with Xula to form a powerful entity known only as KAIJU QUEEN, will they be able to destroy the demon Naga that Yagga has become? Man! All this work just to kill a pimp?!? Jeez! It’s the conclusion of Pimps, Ho’s, and Hocus Pocus!